Strangers on a Train

Take a subway, any subway, packed with strangers locked in their private worlds by fatigue, boredom, headsets. Their bodies may share space, but their emotional lives remain separate. They may fantasize about their fellow riders’ inner selves, but they seldom meet, much less alter the course of one another’s lives. 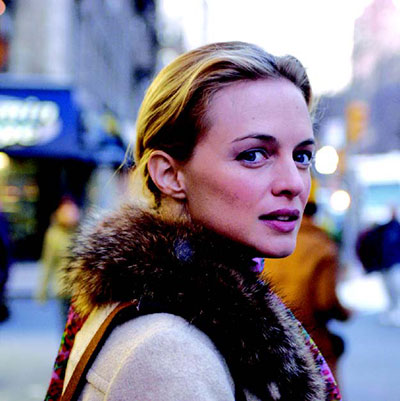 Adrift in Manhattan enters the journeys of three New Yorkers as they are about to intersect. Rose Phipps, played by Heather Graham, is an ophthalmologist whom we meet when she matter-of-factly informs her patient Tommaso Pensara (played by The Sopranos’ Dominic Chianese) that he is going blind. “How long do I have?” he asks. “A couple of months,” she replies, suggesting he ask family and friends for help.

Weeping alone on a park bench, Rose is caught by the telephoto lens of a teenage boy, Simon Colon (Victor Rasuk of Raising Victor Vargas). On impulse, he follows her home on the subway, hiding in the shadows and snapping away as she enters her house, riffles through her mail, and collapses again in tears. Obsessed, Simon tracks her to work and follows her as she buys groceries or goes to the movies with her estranged husband. As the boy continues to photograph her, he comes to know her in a way that is both intimate and frightening.

His behavior feels all the more ominous when you meet his mom, a single mother who demands that he tango with her in the evenings, and who sprawls half-naked in her slip as he rubs her feet. “C’mon, dance with me,” she commands her son. “You love me, don’t you?” When she discovers the photographs he’s taken of Rose, she demands, “Are you stalking her?” Then she snaps, “Well, that’s perverted.”

Against all this creepy connecting and disconnecting is the touching story of the aging painter, Tommaso Pensara, who supports his art by delivering mail in an office building. Slowly edging toward friendship with Isabel Parades (played with tremendous grace by Elizabeth Peña), he takes her to listen to classical music. She in turn invites him to dinner with her grown children. When she realizes that Tommaso can no longer see well enough to sort mail, she locks herself in the mail room with him and furtively stuffs envelopes into mail slots. It’s as touching a love scene as any on film.

Adrift in Manhattan has the spare, richly metaphorical tone of a short story—or three short stories. The intersecting plots are simple and restrained, secondary to the characters and their quest for connection and vision. Screenwriter Moss’s dialogue is sometimes wrenching, sometimes stomach-turning, frequently poignant.

This is the second film Moss and director Alfredo de Villa have cowritten. They collaborated on the screenplay for the 2002 Washington Heights, which won several film-festival awards, including a special mention at Tribeca. Adrift in Manhattan made its debut last January at the Sundance Festival, where it was nominated for the grand jury prize for best dramatic feature. On the festival circuit since then, it has won top honors at the Indianapolis International Film Festival and a Special Jury Prize for Best Ensemble Acting at the Palm Beach International Film Festival. The film opens in New York, Los Angeles, and other cities across the United States on September 21.

Reader Responses to Strangers on a Train