The year 2004 should have been glorious for Edwidge Danticat ’93 MFA. That spring she saw her novel The Dew Breaker published to critical acclaim, and in July she discovered she was pregnant.

But those joys were overshadowed by two cataclysmic nine-year-old father, Miracan Danticat, a Haitian immigrant who’d settled in New York City, was diagnosed with end-stage pulmonary fibrosis. His lungs were too scarred to breathe.

Danticat’s eighty-one-year-old uncle Joseph, a pastor who had raised her in Haiti, was en route to visit his brother, but wound up shackled in Miami’s infamous Krome Detention Center.

Joseph Dantica (he spelled his name without the final t) held a valid visa and had visited his American relatives many times over the previous thirty years. But things were bad in 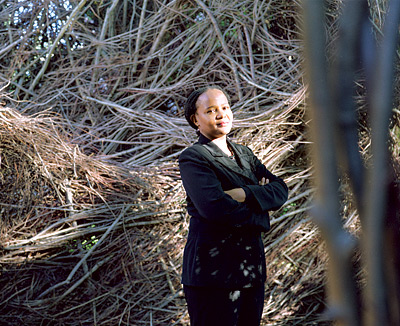 Mary Beth Meehan
Haiti that fall, especially in Bel Air, his Port-au-Prince neighborhood, where street violence was particularly intense. Gang leaders, wrongly believing that Dantica had conspired against them with the police, ransacked and burned his church and called for his beheading. While clearing customs with his son, Maxo, in the Miami airport, Joseph made the mistake of saying he might need temporary asylum. That ill-considered word landed him in detention awaiting a hearing; his prescription medications for high blood pressure and an inflamed prostate were confiscated, along with the Haitian herbs and vitamins he’d brought for himself and his brother. Edwidge Danticat was able to hire a top immigration lawyer, who arranged for an expedited hearing three days later, but her uncle suffered what looked like a seizure during the hearing; a tracheotomy for cancer of the larynx had left him with a hole in his neck and he vomited violently through that opening as well as through his nose and mouth. A medic who was called to the scene proclaimed the old man a faker. Joseph Dantica was taken to the prison hospital, where he waited a day to see a doctor and then died within hours.

Less than a year later, Miracan Danticat, too, died, and the brothers were buried together in New York City, in a cemetery in Queens—sharing a tombstone after thirty years apart. Edwidge Danticat found her only solace in the fact that before her father died he was able to hold his new granddaughter and namesake, Mira.

Brother, I’m Dying is a portrait of these two men, each of whom loved Edwidge Danticat as a daughter. Her parents moved to New York City when she was four, leaving her and her younger brother in the care of their aunt and uncle until it was possible for the children to emigrate eight years later. When she finally was reunited with her parents in the United States, she grieved for the father she was losing in Haiti.

Danticat tells the story of her father’s and her uncle’s deaths in a cool, dispassionate narrative into which she weaves a wealth of Haitian history and folk tales.

In oneof those stories, Father God and the Angel of Death are walking through Bel Air, arguing as to which of people love more. God knocks on a poor woman’s door asking for water, but she refuses; she has only enough for her family. “The only one I’d give my water to right now is the Angel of Death,” she says.

“Because the Angel of Death doesn’t play favorites.”

Reader Responses to Her Two Fathers