By Lawrence Goodman / November / December 2007
December 3rd, 2007
“I hate to be an advocate of death and disease,” Johns Hopkins University political economist Francis Fukuyama told the crowd. As outrageous as it may have seemed, it was the kind of remark you’d expect to hear during a debate on biotechnology, which holds out the promise of ridding humans of disease and extending their lives. Fukuyama, who made headlines in 1989 by declaring the “end of history,” visited campus in October to debate the safety and morality of biotechnology. As part of this year’s Janus Forum Lectures, a student-run initiative that sponsors discussions of heated political ideas, he was pitted against Lee Silver, a Princeton molecular biologist. The event was entitled, “Playing God? Biotechnology and the Future of Humanity.” 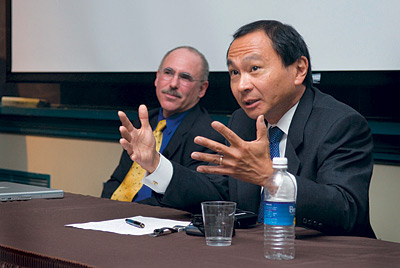 Peter Goldberg
Fukuyama’s position was that we are entering a dangerous era in which advances in biotechnology will enable us to engineer our offspring in ways that are unpredictable and possibly catastrophic. Parents will be able to rid their children of genetic diseases while they are still in the womb, even though, as Fukuyama put it, “every human defect has its opposite.” For example, a gene mutation that causes sickle cell anemia is also thought to protect against malaria.

Fukuyama said he was advo- cating for disease because he worried that wiping out certain illnesses will also wipe out the positive effects of the gene that causes them. “I am not so sure we really know what is good for human beings,” he said.

As for advocating death, Fukuyama said he wasn’t sure longer for its own sake was necessarily a good thing. “Do we want this extension simply because we fear death?” he asked. “Is there actually any higher good associated with not dying when all you are trying to do is live longer?”

Silver offered a much more upbeat assessment of biotechnology’s potential. Those who worry about playing God or changing what nature intended, he said, don’t recognize that “nature doesn’t care about pain, suffering, and death,” and God “doesn’t care about individuals.” His evidence for this was the disease and misfortune that occurs 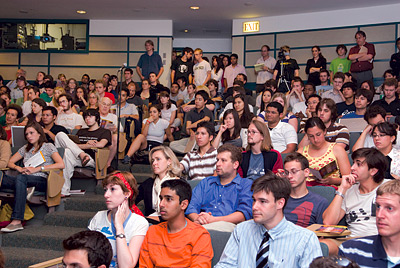 Peter Goldberg
all around the world. Human beings, Silver said, “can invent technology that brings benefits.” This inherent capacity simply exists and allows us to control nature and even to trump God.

In response to Fukuyama’s argument that diseases may have their hidden upside, Silver cited the example of bipolar disorder. The evi- dence shows, he said, “there is no reason bipolar disease exists.” It’s another instance of a phenomenon that arose because “nature doesn’t give a damn” about the individual.

So if we use biotechnology to cure a fetus of bipolar disorder, we wouldn’t be so much screwing around with nature as doing what human beings have always done: alleviating suffering.

Silver’s position was that parents are in the best position to decide how to use biotechnology on their offspring.

“It’s their right,’ he said. ”Is there any reason you can think of to stop people from doing this?”