After three years of overcoming personal setbacks to achieve individual triumphs, the Bears’ formidable guards, Mark McAndrew and Damon Huffman, are focused on one thing in this, their final season: winning. Having each raked in All-Ivy honors, the two say they don’t care how much they get to play. They just want to win as many games as possible.

It’s going to be a challenge. The Bears came out strong in the season opener against Eastern Michigan, winning 74–55. Huffman led the scoring with twenty-four points, including six three-point baskets; with McAndrew adding twenty-two points, the team looked unbeatable. But that start was followed by a 72–57 loss to Michigan, despite Huffman’s seventeen points. 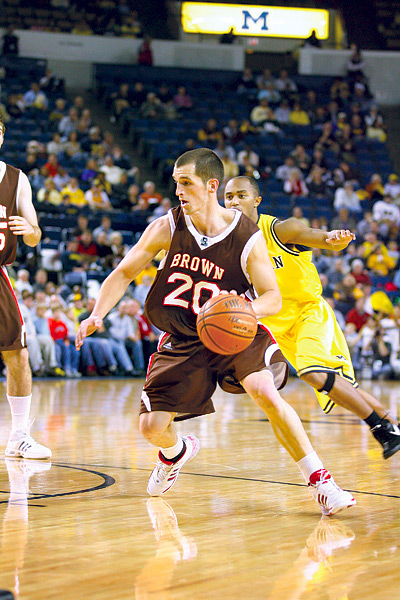 Then URI tamed the Bears, 75–61. As the Ivy League Rookie of the Year in 2004–05, Huffman began his college career with a strong start. As a sophomore he started all twenty-seven games and ranked second in scoring, with 10.8 points per game. As a junior, however, he had to adjust to a new offense while proving himself to a new head coach, Craig Robinson, who’d arrived at Brown from Northwestern. Despite an early- season injury, Huffman bounced back after missing only a handful of games. With 14.7 points per game, he finished second on the team and seventh in the Ivy League, earning All-Ivy honorable-mention accolades.

McAndrew’s start was rockier. For his first two years he languished at the end of then-coach Glen Miller’s bench, averaging just 4.1 points per game as a freshman and 2.1 as a sophomore. Robinson’s arrival changed all that; under the new coach, McAndrew has seen more playing time and has made the most of that opportunity. “Every year is a new year,” McAndrew says, “and a chance to prove yourself and make yourself better.”

Huffman adds, “Coach Robinson said, ‘I am not going on anything that previously happened. I am going to put the five best guys on the floor regardless of who they are.’ I think that motivated a lot of people.”

“It was pretty much open for everybody,” says McAndrew. “You never thought there was a closed door on you. He was always willing to give the next guy an opportunity. It was always reassuring to you as a player. I’ve got an opportunity today to show Coach Robinson that I can help us win games.”

McAndrew transformed himself last season, becoming one of the top scoring threats in the Ivy League. He averaged 18.6 points per game in Ancient Eight contests and 15.8 overall, earning a spot on the All–Ivy League first team. If there were an award for the most-improved player in the Ivy League, McAndrew would have been a shoe-in.

Together, McAndrew and Huffman are one of the top long-range shooting combinations in the Ivy League. Huffman currently stands fourth all-time at Brown with 150 career three-pointers, while McAndrew ranks tenth in that with ninety-nine career treys, including seventy-two last season.

That strength raises the question for an opposing coach: whom should your best defender cover? Both guards nailed more than 44 percent of their attempts from behind the arc last season, so leaving either open is practically an automatic three for the Bears.

“We know in our system it is always helpful to have a few shooters out there because you know if you’re cutting then someone else is getting open,” McAndrew says. “It is a real fun system for me and Damon and several other guys in the locker room to play, because we know our cuts are getting guys open.” 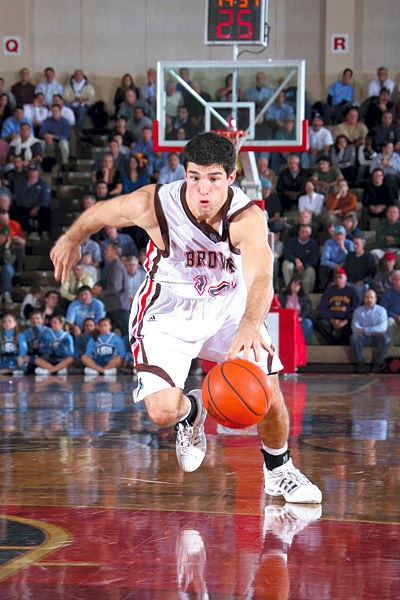 If opponents do decide to shut down the Bears’ backcourt bombers, that is fine with both of them. The pair is squarely focused on winning this season, and each will do whatever he can to achieve that goal.

“Both Mark and I are the type of players that would put the team before ourselves,” Huffman says. “If we could win an Ivy League championship and Mark and I could average two points a game and play ten minutes a game, we would both do that.”

“Damon and I are the two leading returning scorers, and yet we still had a losing record,” McAndrew says. “That doesn’t really speak volumes about our individual accomplishments if we’re not helping out the team. In our last year, it is about winning. It is about putting a product out on the court that is going to be competitive every single night to win games. If that is me playing ten minutes a game and averaging two points, that’s what it is going to be. It is our last go-round, and we want to make most out of it.”

Over the last three seasons, the Bears have struggled. Their record has been 12–16, 10–17, and 11–18 overall. Within the Ivy League, fortunately, their record is a little closer to .500, at 5–9, 6–8, and 6–8 over the course of McAndrew’s and Huffman’s careers. The frustration is hard to bear: both players want to leave with a winning record during their last season.

“We have the highest aspirations,” Huffman says. “We want to win the Ivy League championship; we want to go to the NCAA tournament. But you can’t go from here to there without doing all the little things.”

“To reach the pinnacle, you have to take incremental steps,” McAndrew emphasizes. “Our goals are: 1) to get better every day and 2) to look out for another and be good teammates. That will take care of what happens on the court with us.”