Attention all alumni: during your years on campus, how many times did you enter the John Carter Brown library?

If you answered zero, you’re not alone. Though it’s centrally located on the College Green, the JCB is used mostly by researchers from distant places, who arrive to examine its impressive collection of materials relating to the first two hundred years or so of European settlement of the New World. For researchers of that period, the JCB is the Fenway Park of academia. 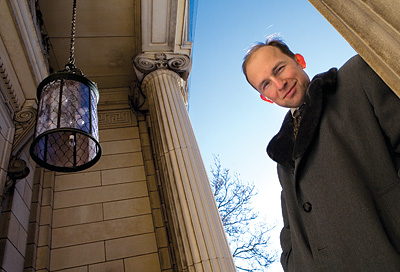 Scott Kingsley
So it came as a bit of a surprise last summer when library’s board hired Ted Widmer to replace longtime director Norman Fiering, who was retiring. Although Widmer has three Harvard degrees, including a PhD in the history of American civilization, he is better known as a former presidential speechwriter for Bill Clinton and a reporter and essayist for a variety of general-circulation magazines and newspapers. His byline pops up much more frequently in the New York Times than in academic journals, and his most recent book was an edited volume in the Library of America series, the 2006 American Speeches: Political Oratory from Abraham Lincoln to Bill Clinton.

But in fact the choice was part of a strategy to make the library more accessible to nonscholars and more inviting to students and faculty. “The front of the building can be intimidating,” Widmer says. “We have very large doors.”

Widmer hopes to open these doors by inviting more students and faculty in—he has already created a ten-dollar-a-year “friends” program for undergraduates—and by encouraging the scholars working at the JCB (known as “fellows”) to think of their potential audience more broadly.

“I’d like to help our fellows think about the act of writing history,” he says. “Everyone has his or her own style of writing, yet at the same time there is a divide between the way academics write and the way most people out there read.”

Widmer says he admires many history books written by nonacademics—David McCullough, for example—and their ability to reach many readers.

Because the library contains material from the early years of British, French, and Spanish settlement in the New World, Widmer believes the JCB could be especially useful in tracing how the Americas have been viewed by the rest of world, a subject of particular importance today.

Although a Harvard alumnus, Widmer grew up at Brown. His father, Eric Widmer, was a Chinese history professor and a dean of admission. Ted’s first job was as a ball boy for men’s soccer.

But it was Bill Clinton who transformed him from a scholar to a writer. “I was a foreign-policy speechwriter for Clinton, working in the National Security Council during his second term, from 1997 to the end,” Widmer says. “That radically changed the way I wrote, because you can’t be wordy, you can’t be abstract. You have to be concrete and efficient. And I found that after some difficulties adjusting, I really liked being that way.”

Widmer also wrote a history column for John F. Kennedy Jr. ’83 at George magazine. “I wrote a letter to him out of the blue asking if he would consider a stranger’s attempts to write history for a new magazine,” Widmer recalls. “To my amazement, he said yes. There was a whole cadre of Brown alums at George, friends of John who loved history and politics, and when they discovered I had Brown connections, I felt even more a part of their world.”

Now, he says, his mission is simple: “I need to go out and explain to a new generation why the JCB is one of America’s top centers for the study of our early history.”

Reader Responses to Opening the Doors