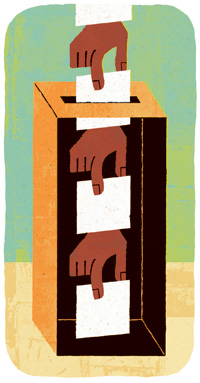 Timothy Cook
Oh, to live in New Hampshire or Iowa. It turns out that their residents pretty much select each political party’s presidential candidate, and according to Associate Professor of Economics Brian Knight and doctoral student Nathan Schiff ’05 this is not a good thing. In a December National Bureau of Economic Research working paper, the pair showed that Iowans and New Hampshire-ites have up to twenty times the influence of voters in later primaries. “Evidence that early voters have a disproportionate influence over the selection of candidates violates one-person-one-vote,” says Knight, “a democratic ideal on which our nation is based.” Furthermore, he notes, Iowa and New Hampshire “are not exactly representative of the nation in terms of diversity.”
What do you think?
See what other readers are saying about this article and add your voice.