“A white doctor, Asian lawyer, and African American businessman meet at a bar. What do they have in common?” 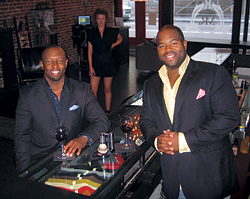 Kumi Walker, left, and Sean Heywood at the bar of their upscale barbershop, MR.

The correct answer, according to Sean Heywood ’00 and Kumi Walker ’00, is that they all get haircuts. “It’s a greater commonality than coffee, music, or political affiliations,” says Heywood. So it only stands to reason, he says, that “you could build a entire business where haircuts served as the common pull.”

What he and Walker have created in San Francisco’s financial district is a better barbershop. Called “MR.”, as in “mister,” it’s got a bar with a 100-inch flat-screen TV, a shoeshine stand, and a store that sells cigar accessories and cashmere socks. And, yes, of course, there are barber chairs—high-backed numbers with black leather seats, each with its own TV for the client’s viewing pleasure. In essence, the one-year-old barbershop-cum-social club is a place where yuppies can grab a drink and network, all while getting an excellent haircut and shave.

Heywood says the shop attracts customers from every race, ethnicity, and age group. Happy hours, he says, draw as many women as men. Getting a haircut really does turn out to be the great unifier. It’s even reached the point, Heywood says, where “the unofficial word on the street with women is that MR. is a good place to meet men,” he says. According to Heywood, the clientele is mostly young professionals.

Such luxury does not come cheap though. The basic package, which includes a drink, shampoo and head massage, haircut or straight razor shave, and a follow-up trim, costs $65. The so-called “Mogul” package includes all that plus VIP access to events at MR., access to a Web site where you can personalize your MR. experience, a classic straight-razor shave, and priority access to the barber of your choice. It’s priced at $250. And much like a gym membership, you have to pay these sums on a monthly basis.

Heywood says he’s been drawn to barbershops ever since he was a young kid growing up in Brooklyn. They were the “epicenter” of the community, he says. “Those were the places where I would find out the latest about music, fashion, and what was going on in the community. You would also hear the best and worst jokes out at the time.”

Walker came to the trade through his father, who paid his way through college by cutting hair. He cut Walker’s hair when the boy was young. Walker says he and Heywood see MR. as a way to bring the “black barbershop experience to the masses.” When they were designing MR., the duo made sure that the barber chairs all faced one another so customers could converse the way Walker and Heywood remembered men talking in the barbershops of their childhood.

Heywood and Walker met at Brown and then both went off to New York to work at financial firms. Each quickly realized he couldn’t stand not being his own boss—“we wanted to create our own business,” says Heywood —and they quit their jobs and went off to Stanford’s business school.

When they graduated in 2006, “we plowed all of our savings into this venture,” Walker says. “We embarked on a path that some would call ignorance. We called it faith.” So far their gamble has paid off; Walker says the company is “doing well.”

The two are now thinking about expanding. They want to open in other cities and possibly even the suburbs. The dream, says Walker, is to become the Starbucks of the haircutting world.

There are millions of men with hair out there, says Heywood: “Let’s get them in the chair.”

Reader Responses to A Cut Above