We all know about the French Paradox: millions of wine-swilling cheese eaters who mysteriously stave off heart attacks. But what about the American Paradox: a nation obsessed with fitness and nutrition that "has the worst health on the planet"? That's what best-selling science writer Michael Pollan asked his overflow Salomon Hall audience February 21. 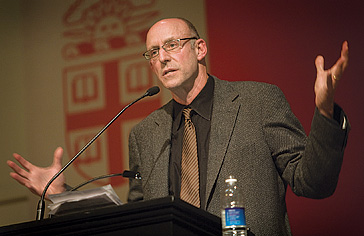 Scott Kingsley
Don’t eat anything your great-grandmother wouldn’t recognize as food, Pollan says.
Pollan's latest book, In Defense of Food: An Eater's Manifesto, has dominated best-seller lists since he published it in January, and when he asked how many people had read his 2006 Omnivore's Dilemma, which is still a paperback best-seller, about three-quarters of the audience raised their hands. No bubbly Rachael Ray, the lanky, professorial- looking Pollan (he teaches journalism at UC Berkeley) looked a little stunned at his celebrity.

Pollan is smart, pragmatic, and funny, traits he exhibited in abundance during his visit to Brown. He raved about the root vegetables Brown students had cooked him for lunch that day. Eat what's local and in season, he urged.

Part of Pollan's appeal is that he doesn't overcomplicate eating. About the U.S. government's consideration of a national rating system to help us judge a food's healthiness, Pollan said it was "well intentioned but absurd. I think a society that needs that kind of system—that abides by such a system—has a national eating disorder." He used the term nutritionism to describe Americans' obsession with the components of food, and emphasized that healthy eating is also about pleasure, community, communing with nature, cultural and ethnic identity, and ritual celebration.

Pollan traced America's faddish infatuation with "good" foods and demonization of "bad" to the early twentieth century, when protein was deemed dangerous. In that golden age of breakfast cereal, John Harvey Kellogg and Sylvester Graham cleansed America's bowels with fibrous carbohydrates. In the 1970s America discovered the evil of saturated fat. "We took people off butter, a moderately unhealthy fat," he noted, and put them on trans-fat, "a demonstrably lethal one."

Then there are the miracle ingredients. The fish fat Omega-3 promises to ease boomers' achy joints while boosting their memories. The latest wonder food is pomegranates, a fruit, Pollan observed, that was too much trouble to eat until it was marketed as rich in cancer-fighting antioxidants. He cited unpublished research claiming that pomegranate juice cures erectile dysfunction in rabbits. "Who'd have thought they had a problem with ED?" he asked.

Of course, given the power of the farming and cattle-raising lobbies, food decisions are often contaminated by politics. A critical moment in the history of fake food was the Food and Drug Administration's repeal of the "imitation rule" in 1973. "Suddenly it was okay to make sour cream that had no sour cream in it," Pollan said. America's road to obesity was paved with low-fat sour cream, low-carb pasta, and SnackWells diet cookies. "That's when the list of ingredients expands," he said, and the more ingredients listed on the package, the more removed from real, basic foods the contents tend to be. It was politics that led to the 1977 defeat of George McGovern's Dietary Goals Consensus. McGovern's committee came up with a simple guideline: Eat less red meat.

"The industry went crazy," Pollan said. McGovern was forced to replace his clear, commonsensical advice with this oblique encomium: "Choose meats that will lower your saturated fat intake."

"From that day forward you will never hear the U.S. government tell people to eat less of any ingredient," Pollan said.

In the absence of sensible governmental guidance, Pollan set forth his own list of rules to eat by:

- Eat food, not too much, mostly plants. (That's the message of his new book.)

- Don't eat anything that won't eventually rot. (If a microbe won't eat it, you shouldn't either.)

- In the grocery store, he said, "shop the perimeter," where all the real food—fruits, vegetables, dairy products, fish, and meats—is refrigerated.

- Don't eat anything with more than five ingredients.

Pollan said that in his office he keeps a Twinkie he carried around on his last book tour. Three years later, he said, it's as soft as the day he bought it, softer, as your grandmother knew, than any food that old has a right to be. —C. B. H.