Looking For A Job?

After getting fired from her first job, Hannah Seligson '04 could have sought guidance from a pro. Instead, at age twenty-five, she wrote and published her own book, New Girl on the Job: Advice from the Trenches, which will appear in paperback in May.

"I interviewed over 100 young women and two dozen women who have made it to the top of their field," Seligson says. "I think of myself more as your BFF [best friend forever] in the trenches as opposed to the older, wise sage who's been there and done that. Everyone struggles with these issues when they're starting out in the workplace. I'm the friend who decided to take the little extra initiative and actually find out the answers and figure things out with you." 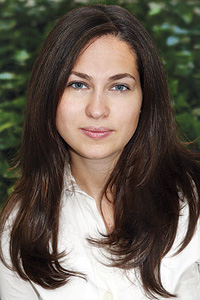 Heidi Green
Seligson, a political science concentrator, landed her first job at a small consulting firm. "I didn't do the requisite soul-searching and wound up in a career path that didn't match my natural talents and interests," she says. Getting fired "knocked me on my ass," she says, but it also freed her for a new passion: journalism.

Seligson describes herself as a "multi-platform journalist." Her articles have appeared in the New York Post, the Boston Globe, the Village Voice, and Marie Claire, among other publications, and she blogs for four sites: The Huffington Post, DailyCents, Damsels in Success, and Women for Hire.

Seligson is savvy enough to heed the advice she's given and believes firmly in cultivating mentors. She calls on more than a dozen people for guidance on topics

ranging from networking to negotiating. In turn, she mentors younger women. "What goes around comes around," she says.

Next up for Seligson is a book about long-term relationships. She's had two of those, she says, and she sees her peers dating for long periods of time. Her working title is A Little Bit Married: How to Know When to Walk Down the Aisle or Out the Door. "Those are two big things that happen in your twenties," she says. "You're figuring out your career and you're trying to figure out your romantic prospects, too."

Mia Geiger is a freelance writer in Philadelphia.

Reader Responses to Looking For A Job?