Like so many women of her generation, Charlotte Lowney Tomas was educated to be a secretary. Born in Fall River, Massachusetts, she attended nearby Bryant College, where, as she once put it in an interview, she studied "shorthand and typing and then some more shorthand and typing!" As soon as she graduated, Tomas, who died in December at age 78 after a long illness, began working at Pembroke as a secretary to the college's President. 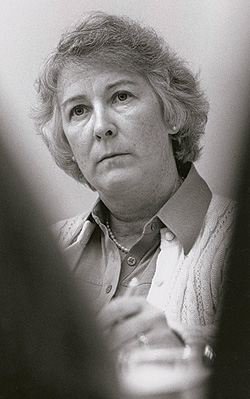 John Foraste
Tomas was credited with resuscitating the RUE program at Brown.

It was the beginning of a nearly 40-year-long relationship with Brown, where, in addition to obtaining undergraduate and masters degrees, she rose to the highest levels in administration. In 1968, the one-time secretary even served as acting dean of Pembroke for a year after the sitting dean took a sabbatical. "Like everyone of our generation," says Caroline Cornwell, who worked with Tomas in the late 1960s, Tomas "loved Brown."

Cornwell says Tomas was the rare woman of her day who "felt she didn't have to get married straight out of college. She decided, 'Hey, wait a minute, I don't have to follow this drummer.' "

After four years of working at Brown followed by another year working at the New York Stock Exchange, Tomas decided she would return to Providence to get a liberal arts education. She also took a position as a housemother for Mary Woolley House, and discovered what colleagues say was one of her greatest pleasures—advising and working with students. "People are so interesting—I have made many rewarding personal contacts," Tomas told a Fall River newspaper in 1957.

Tomas slowly moved up through the ranks of Pembroke's administration. She began as an undergraduate working in the residence office, became director of placement in 1957, and in 1966 was named an associate dean. Along the way, she earned a masters at Brown in history. She also found her mate, Vincent Tomas, the professor of philosophy she married.

Tomas helped facilitate the merging of Pembroke and Brown in 1971, and in that same year, she took over the then-flagging Resumed Undergraduate Education Program (RUE). She was an natural choice for RUE, having resumed her undergraduate education after some time off herself, and she was later credited with resuscitating the program.

"I could always depend on her," former Dean of the College Harriet Sheridan told the BAM in 1990. "I remember saying of Charlotte that the Red Sox had missed a great bet. She was a great pitcher-inner."

Upon her retirement in 1990, Tomas was asked by a reporter if she planned to remain active at Brown. She told the Brown Daily Herald, "I tell all my friends that I'm going to be the resident ghoul of the Blue Room."

Tomas is survived by a niece, Margaret Sylvester of Maine, a nephew, William M. Harrison, of Louisiana, and two stepsons. —L.G.

Reader Responses to Marriage Could Wait