Pay As You Go

John Bolton, the controversial former U.S. ambassador to the United Nations, once said "it wouldn't make a bit of difference" if ten floors of the U.N. headquarters building in New York City were destroyed. Now he has another idea: the agency should make all dues and contributions from member nations voluntary. But in a debate with Bolton, Richard Holbrooke '62, another former U.S. ambassador to the U.N., said Bolton's idea was even more radical than his original one. "If you support that, you are supporting the death of the U.N. as we know it," Holbrooke said. 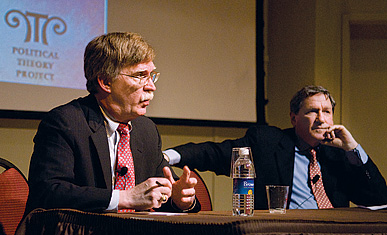 Peter Goldberg
Holbrooke, right, said Bolton’s plan would destroy the U.N.
Bolton, who was appointed by George W. Bush, and Holbrooke, a Bill Clinton appointee, squared off at an event in February sponsored by the Janus Forum Lecture Series, a student-run program designed to bring speakers to campus from all across the political spectrum. In general, Bolton portrayed the U.N. as dysfunctional, indecisive, overly bureaucratic, and ridden with corruption and mismanagement. Holbrooke, currently professor-at-large at Brown's Watson Institute for International Studies, reflected the more internationalist views of the Clinton administration. He said the U.N. was "the last best hope" of humankind.

Right now, the U.N. assesses annual mandatory dues on its 192 members, basing the amount on an individual nation's wealth and debt. Failure to pay can mean losing your vote in the General Assembly, the organization's legislative body. But Bolton said making contributions to the U.N. voluntary would introduce an element of the free market into the system. Nations would willingly buy into a more effective U.N., and various agencies within the U.N. would compete with one another for these payments. The result would be a more accountable U.N. "We will be insisting on a principle I don't consider too revolutionary," Bolton said. "We should pay what we want, and we should get what we pay for." He said that his time as ambassador at the U.N. from 2005 to 2006 had convinced him that "marginal reforms won't work."

Holbrooke said the U.N.'s problems—and he granted there were many—stemmed from a failure of resolve on the part of its members, not any great deficiencies in the organization itself. "You can't blame the U.N. because the U.N. can only do, tin cup in hand, what its member states want," he said. "Yes, the U.N. is flawed. Yes, the U.N. makes mistakes, but does anyone think the world would be better off without it? Does anyone think the U.S. would be better off without it? I hope not." —L. G.

Reader Responses to Pay As You Go