Norah Gaughan '83 is a rock star among knitters. The former biology concentrator and author of Knitting Nature bases her mathematically elegant patterns on natural forms such as spirals and fractals. Operating on a grander scale, Dave Cole '00 knits with industrial material; the Massachusetts Museum of Contemporary Art (Mass MoCA) commissioned him to create a thirty-five-foot-long American flag. 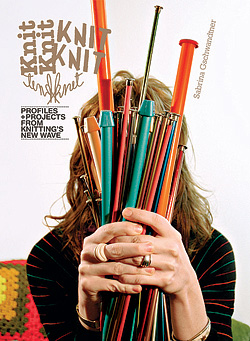 Work by both Gaughan and Cole can be seen in the book KnitKnit by Sabrina Gschwandtner '00, herself an avant-garde knitter. Her book profiles twenty-seven men and women pushing the craft of knitting into the realm of modern art.

Gschwandtner's interest in the craft began when she took up knitting with her roommates to keep warm in her chilly Providence apartment. She was soon selling her knitted projects in New York City's high-end boutiques, but as a semiotics concentrator, Gschwandtner was simultaneously learning to think about art in a collaborative way. Knitting became, she says, "the act of working things out three-dimensionally, which frees the mind to think in different ways about process, and to think about art in a non-intellectual, theoretical way."

She founded the limited-edition biennial art journal KnitKnit in 2002 to explore the connections between traditional craft and contemporary art. From that work sprang her 2007 book, for which she interviewed multimedia fiber artists, political activists, and traditional hand knitters.

Gaughan, the design director at Berrocco yarns, credits her lifelong fascination with physics, math, and evolution with helping her "visualize the architecture" of stitch patterns. Working with yarns, she crafts such traditional garments as hats and sweaters, but constructs and drapes them with a fashion designer's imagination. Nonchalant about her intuitive grasp of complex design principles, she describes the process as organic: "Patterns don't come from nowhere, and each design builds on earlier ones," she said in an interview this winter. "I can't stop the ideas from coming."

Contemporary artist Dave Cole takes a more radical and self-conscious approach. His witty sculptures subvert the artistic process while offering political commentary. Early on, he knitted a queen-size electric blanket out of contractor's cord, complete with a plug. Then there is the sweater he made from Kevlar, the material used in bulletproof vests. Cole says he first realized that industrial textiles could be a means of creative expression in a Brown sculpture class taught by Professor of Visual Art Richard Fishman.

Cole revels in "the intensely tactile process of knitting," commenting that his pieces evoke strong reactions from viewers who are normally far removed from the creative process.

"The most interesting areas of contemporary art are where genres blend into one another," he says. "The boundaries are where the most exciting things happen."

Reader Responses to Pushing The Limits