Faced with a national economy that may or may not be in a recession, Brown is increasing financial-aid spending dramatically. In February the Corporation made history by approving the largest single-year increase in financial aid in the University's history.

The total aid available to undergraduates will jump by 20 percent to $68 million. As a result, most parents jointly earning less than $60,000 will no longer have to pay any tuition for their child's education. In addition, families with less than $100,000 in income will no longer have to take out loans—which can reach almost $26,000 over four years as part of the financial aid package they receive from Brown. Instead, their assistance will be in the form of scholarships. Even parents with more than $150,000 in total income may see some relief. About $6,000 in loans they have had to borrow as part of their four-year financial aid package will now be in the form of a grant. With about 40 percent or 2,360 of Brown's undergraduate students currently receiving some sort of financial aid, says Elizabeth Huidekoper, Brown's executive vice president for finance and administration, "this is a huge commitment by Brown."

Why take on this financial burden at this time? To some extent the University was responding to competitive pressure from o 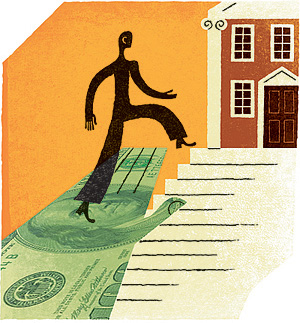 ther Ivies. Harvard, Yale, Stanford, and Princeton all recently approved large increases to their financial aid programs. Harvard, for instance, eliminated all tuition payments for families earning less than $60,000 two years ago. This year, it began targeting middle-income families; the school now requires most parents who earn between $120,000 to $180,000 to pay a mere 10 percent of their annual salary toward their child's tuition.

"We have to recognize we're competing for the best and brightest out there," says James Tilton, Brown's director of financial aid. Even though Brown's financial aid program still lags behind those of its more affluent peers, he believes this new increase will nevertheless "ensure equal access for all students and families and make Brown even more affordable."

Brown's move also comes as the U.S. Congress has been looking into whether universities are hoarding their multi-billion-dollar endowments rather than using them for student financial aid or lower annual tuition. In late January, the U.S. Senate finance committee asked 136 of the country's wealthiest colleges and universities—including Brown—for information on how they spend their endowments. Huidekoper insists, however, that politics had no effect on the University's decision. "It's not a response to Congress," she says. "We've been looking at this for a while."

Brown will pay for the new policies by drawing more money from its endowment. Since 1985 the University's policy has been to take annually from the endowment an amount no more than 5.5 percent of its average market value over the previous three years.

That amount will now increase to 5.9 percent. Huidekoper says administrators will also reevaluate whether the formula for endowment spending itself needs to be revised. "This is clearly something that we will need to manage closely," she says. She adds there may need to be reductions to the annual raises given to some employees as well as cutbacks in spending on facilities.

Should parents count on Brown growing even more generous with aid in the upcoming years? Not necessarily, says Huidekoper. She says Brown was able to implement this recent increase because investments made with money from the endowment have performed extremely well over the last few years. The endowment now stands at $2.3 billion, up from $1.43 billion in 2000.

"I'm very hopeful we will have another extraordinary three years" of financial performance, says Huidekoper. "It may enable us to do this again."