That $12.50 copayment your insurance company charges for a mammogram may be a lot more costly than it seems. Brown researchers have found that women whose insurance plans require even modest copayments or deductibles are significantly less likely to go for regular breast-cancer screenings. 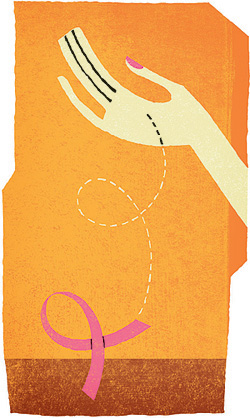 Timothy Cook
The American Cancer Society recommends annual mammograms for older women, and studies have shown that regular screenings lead to earlier detection of cancers and better outcomes. At the same time, many health insurers have been raising copayments and deductibles as a way of counteracting a steady rise in medical costs. So researchers from Brown's Alpert Medical School and Harvard Medical School asked: how would increasing copays affect the number of women undergoing breast-cancer screening?

The researchers looked at 174 Medicare managed-care plans between 2001 and 2004, a period when cost-sharing was on the rise. They studied the records of 366,474 women in thirty-eight states who were between ages sixty-five and sixty-nine. They discovered that women who shared the cost of mammography were 8 percent to 11 percent less likely to get biannual screenings. And the reluctance was not just among poor or less-educated women. The numbers were consistent even after they were adjusted for income, education, race, and other factors.

"Regular mammography is not a discretionary service for this group," says the study's lead author Amal Trivedi, an assistant professor of community health at the Alpert Medical School.

Previous studies of breast-cancer screening rates have looked at the impact of such factors as the availability of mammography, physician recommendations, and education. "No one had looked at the impact of cost-sharing," Trivedi says. At the beginning of the study one in 200 women in Trivedi's study group was sharing the cost of her mammogram. By 2004, the number had risen to one in nine.

In addition, 77 percent of women with complete coverage received biannual mammograms while only 69 percent of those with partial coverage did. In plans that added copayments between 2002 and 2004, screenings dropped 6 percent (overall, screening increased 3 percent during that period). Copayments ranged from $12.50 to $35, with an average of $20.

"We think it would make not only good public-health sense but good financial sense to eliminate cost sharing." Trivedi says.