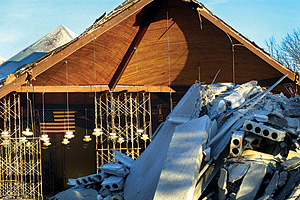 With a few swings of a wrecking ball, the Smith Swim Center became no more in February. The nearly thirty-year-old building had been deemed unsafe because of rotting wooden beams inside. For the time being, Brown's swimmers are using a temporary pool built on campus, but in 2010, a new facility will open as part of a new athletic center.
What do you think?
See what other readers are saying about this article and add your voice.