Darren Lowe '92 was recently inducted into the National Lacrosse Hall of Fame in Baltimore. Lowe holds the Brown career scoring record with 316 points, the third-highest total in NCAA history.

Led by Matt Gevelinger '09 and captains Levon Mock '08 and Jeff Schell '08, the wrestling team finished eighth at the EIWA Championship. Gevelinger placed third at 184 pounds, while Mock and Schell took fourth at 285 and 133 pounds, respectively. All three qualified for the NCAA Championship, the highest number of qualifiers since 2002. 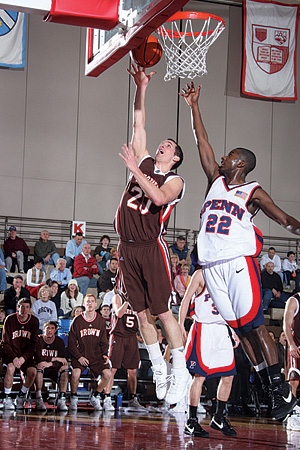 Gymnast Jennifer Sobuta '09 finished first in the uneven bars at the Ivy Classic with a score of 9.775, a new personal best and the fourth-highest score in school history. Sobuta also took second in the all-around competition.

After tying for fourth place at the 2008 ECSC Regional Championship, the Brown skiing team earned a trip to the USCSA National Championship. Krista Consiglio '11 led the Bears by tying for ninth place overall, while Anna Bengtson '09 placed twelfth in the final standings.

Matt Britner '08 was selected by the New England Revolution in the third round of the Major League Soccer Super Draft in January. Laurent Manuel '08 was picked in the fourth round of the Supplemental Draft by the New York Red Bulls.