Two of last season's baseball stars reported to spring training in the majors this year.

For baseball aficionados, spring begins not on March 20 but on the day pitchers and catchers report for spring training. That day was particularly significant for Bears sports fans this year. Two Brown baseball players, hurler Jeff Dietz '08 and catcher Devin Thomas '07, were invited to spring training by major league teams. Dietz, the Ivy League Pitcher of the Year, and Thomas, the Ivy League Player of the Year, were a big reason the Bears won the Ivy title last season; this season they're hoping their success will carry them onto their field of dreams. 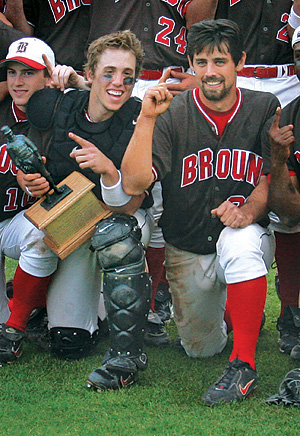 The Detroit Tigers drafted Thomas in the seventh round last spring, while Dietz, surprisingly, went undrafted. Determined to prove the scouts wrong, Dietz spent his summer pitching for the Wareham Gatemen in the highly regarded Cape Cod Baseball League, where he dominated the competition with a 0.73 earned run average. In twenty-four-and-two-thirds innings, Dietz struck out twenty-eight batters and allowed just two earned runs.

That performance against some of the best college players in the country caught the attention of the Arizona Diamondbacks, who signed him to a contract typical of one offered to an eighth- or ninth-round draft pick. Thomas, meanwhile, played in thirty-three games for the Oneonta Tigers in the New York-Penn League last summer, belting six homers and driving in twenty-seven runs. Unfortunately, a thumb injury sustained during a collision at home plate caused him to miss the last month of the season. He spent five weeks in Lakeland, Florida, recovering before he joined the Instructional League in September and October.

Before departing for spring training, Dietz and Thomas got some advice from Brown head coach Marek Drabinski, himself a former minor league catcher in the Atlanta Braves organization.

"I tried to talk to both about what to expect in pro ball," he says. "Things to look out for, things to stay away from, things they should do. Because they are both such good people, I think they understand the work ethic that they need to have every day. They've got their priorities in line, and I've tried to explain to them that it is just a game and you're having fun and don't put any pressure on yourself. Just enjoy it while you're there because unfortunately it is a business and you don't know when it is going to end. I've played with many players who had regrets when they finished, and you can't get it back. Dietz and Thomas are pretty smart kids, and they understand what they need to do."

Thomas has a slight advantage on Dietz. Because New York-Penn League teams are Class A short-season minor league affiliates of major league teams, his experience last summer was at the professional level. In addition to playing time, Thomas left with some words of wisdom from his manager last year.

"My manager in Oneonta said that he learned more about baseball in his first spring training than he had in his entire life to that point," Thomas says. "From my understanding, it is a crash course in a lot of stuff with regards to baseball. It is going to be intense. I think the best advice is to just take it one day at a time and try to soak up as much as you can."

After spring training, the players will be assigned to a team. Thomas will most likely be sent to Grand Rapids, Michigan, the low A affiliate of the Tigers, and the next step up from Oneonta. Dietz is uncertain of his prospects. He may end up with a rookie ball team in Montana, a short-season team in Yakima, Washington, or the low A club in South Bend, Indiana.

"I'm just going to go out and play," he says, "and let the organization figure out where they want me and where I need to be. I'm going to try not to get wrapped up in all that kind of stuff and just worry about playing."

Both players have simple goals for this season, but lofty goals down the road.

"My goals are to really mature as a baseball player," Thomas says, "because this is going to be a season like I've never had. We play 150 games, and you're pretty much playing every day. You get a day off once every three weeks. My goal is to take that in stride and try to lessen the growing pains as much as possible. I'm going to definitely improve on the areas of my game that the Tigers organization wants me to, and hopefully that will keep me in good shape for moving up in the future in the organization. From what I've heard from my manager and the player-development people, they are impressed with how I have progressed."

As for Dietz, coach Drabinski believes he has an important advantage. "For Jeff, his biggest strength and his advantage is throwing submarine style," Drabinski says. "Number one, there aren't a lot of guys that do that, period. Number two, you throw in the fact that he throws in the low nineties from that arm slot, now you are talking about a very rare submariner. The third thing is he is a guy that is going to be able to pitch every day for Arizona out of the bullpen."

And Drabinksi believes Dietz has the variety of pitches he needs in the big leagues. "His best pitch," he says, "is his slider without question, but his fastball also has so much movement that guys have to respect it, and that is why his slider is as effective as it is. Plus, he throws strikes and he doesn't walk people and he works fast. I would not be surprised if Jeff Dietz is in the major leagues next year. That is how good I think he is."

Gordon Morton '93, who covers sports for the BAM, has written a book on the history of Brown athletics.