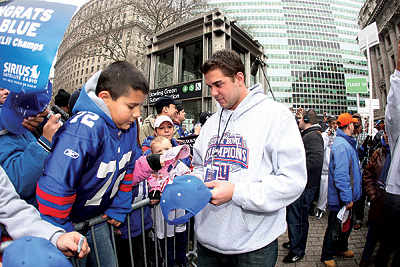 Evan Pinkus/Getty Images
New England sports fans dread seeing a victory parade in New York City, but Brown fans were pleased to see New York Giants linebacker Zak DeOssie '07 celebrating on Broadway after this year's Super Bowl. DeOssie was the long snapper for the team's game-winning field goal—much to the chagrin of former Brown linebacker and defensive end Bill O'Brien '92, who watched as an assistant coach on the Patriots sideline.
What do you think?
See what other readers are saying about this article and add your voice.