The Power of Music

In 1998, Carmen Cors traveled to the foothills of the Rocky Mountains near her home in Boulder, Colorado, to attend a workshop on shamanism. The teacher placed her in a trance, had her lie down, and began to play an Australian aboriginal instrument called the didgeridoo. "He was directing the instrument"—a five-foot-long branch of eucalyptus tree that had been hollowed out by termites—"around my body," recalls Cors. "He went around my hands, legs, my whole body. It felt like my whole soul was being vacuum-cleaned." Afterwards, she had a revelation: "I knew I wanted to dedicate myself to learning to play that instrument." 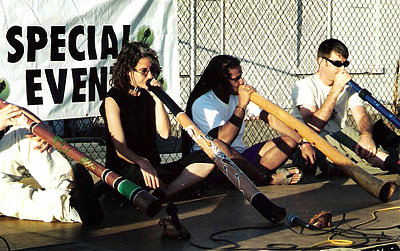 Cors playing didge at a Hudson River Project benefit.
She spent the next eight years learning to generate the vibrating drone and animal-like screeches that the didgeridoo produces. She busked on the streets of Boulder and jammed with the city's sizable community of fellow didgeridoo players. It had become her life.

Then suddenly, in early 2006, Cors lost the ability to play. For reasons she couldn't understand, she lost the motor skills to coordinate her tongue, cheeks, diaphragm, and throat muscles. And eight months later she awoke with a splitting headache. "It was so bad any time I sat up or stood up or turned, it was just throbbing," Cors says. "The only time I felt okay was when I lay perfectly still." She went to a nearby health clinic for a CAT scan. "The technician comes over and clasps my hand and walks me to the waiting room and says 'I'm sorry, we can't let you leave. We have to contact your doctor.'" Further tests showed that she had two brain tumors; the doctors estimated she had just a few months to live. They were able to remove one tumor surgically. On the other they were willing to try a round of highly targeted radiation therapy, but they doubted it would do much good. Says Cors, "My primary care doctor and oncologist both said, 'We've seen this situation before. We know how it plays out. If there's anything you've been wanting to do your whole life, do it now.'"

And so Cors, who was then living in the town of Catskill in upstate New York, returned to the didgeridoo. Day in, day out, she practiced, trying to regain the skills the tumor and the brain surgery had stolen from her. "It was hard, very hard," she says. She practiced around an hour a day. Then, in hopes that it might do some good, she chose to undergo the radiation therapy that her doctors had described. The doctors asked her what music she would like to listen to during the procedure, and she, of course, picked the didgeridoo. She had a CD made by one of her aboriginal friends in Colorado. "I don't know how this happened," Cors says, "but the music just wove in beautifully with the radiation machine. It was as if they were both in perfect harmony." Cors believes she entered a trance state that changed her mind-body relationship and helped her to conquer her cancer. Her dreams ever since, she says, have contained very specific messages about what foods and supplements she should eat to stay healthy. "I'm even told how much," she says.

Cors's latest MRI, taken in early winter, showed that her remaining tumor was shrinking. Of course, she knows there's no way she can prove scientifically that the didgeridoo is what has kept her alive. Still, as much as she can, she keeps on practicing.

"Playing this instrument opened me up to experiencing the world in a certain way, opened me up to a certain kind of awareness," she says. "I'm either cured or have lived significantly longer than I would have." —L.G.

Reader Responses to The Power of Music