A Life on the Court

By his estimate, Charles ("Alex") Robinson III has logged more than 50,000 miles on basketball courts in his lifetime. Break that down and it translates into 8,000 games played over the course of fifty-one years, with roughly six miles of running or walking per game. "I just love the game of basketball," Robinson says. 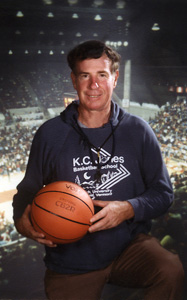 Robinson spent all those years on the court not as a player, but as a referee, mostly at the high school level, but also for the NCAA and, in the late 1960s, the NBA. He got started in 1955, when a friend saw how much he liked coaching Little League and asked if he might like to try refereeing. Robinson thought it was worth a shot.

He took to it immediately. He soon found, he says, "I enjoyed being in front of a crowd." He had been working as a sales rep for a pharmaceutical company, but quickly gave it up to become a full-time referee. It was a far cry from his father's line of work. Robinson's father, Charles A. Robinson Jr., was a professor of classics at Brown. "This would have been the last thing he would have thought his son would do," the younger Robinson says.

Robinson says working a basketball game is hard work. "You learn to be pretty good at taking abuse," he says.

Once, in the 1990s, he worked a high school exhibition tournament in which things got ugly. The United States was playing Russia, and with just two seconds left in one of the games, he called a foul on a U.S. player. "This group of men came down from the grandstand and they threatened me," Robinson recalls. "'Are you some kind of Commie?' they screamed. 'What—do you have a hammer and sickle at home?'" Robinson says his call actually allowed the Russians to tie the score and push the game into overtime.

The United States wound up winning the game by a point, however, but as soon as the buzzer sounded, Robinson followed what he considers to be one of the cardinal rules of refereeing:

"You get off the court as fast as you can because you never know what's going to happen."

Another time, a kid furious over one of Robinson's calls threw a six-volt flashlight battery at him. It hit the ref on the hip, and the kid told him, "You're lucky. I was aiming for your head."

Looking back on his long career, Robinson freely admits, "I made plenty of bad calls, don't you doubt it." Once in the 1980s he was refereeing a college match-up at the Boston Garden, when he called a violation on a player for spending more than three seconds in the free throw lane. "I just lost track," Robinson says. "I called the violation on the wrong team." The coach started screaming at him, and says Robinson, "I said, 'Oh, the hell with it. Let them live with it.'" Has he ever made a mistake that cost a team the game? "I'm either not aware of it or I won't own up to it," he says.

Reader Responses to A Life on the Court