Around one a.m. on March 15, Yossi Knafo, an Israeli graduate fellow at Brown, was standing in the kitchen of his second-floor apartment on the East Side of Providence when he heard a bang come from his bedroom. On the floor lay an unexploded Molotov cocktail. Outside, he saw a small fire burning on the sidewalk. A second firebomb had been hurled at the side of the building and had ignited on the ground, leaving scorch marks on the house's siding. Knafo, who had seen similar acts of vandalism while serving in the Israeli military, immediately called the police. 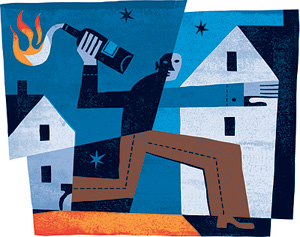 Tim Cook
By the end of the weekend, the Providence Police Department, the U.S. Attorney's Office, the Federal Bureau of Alcohol, Tobacco, Firearms and Explosives, and the FBI were all investigating whether Knafo had been the target of an anti-Semitic or anti-Israel hate crime.

Although the attack happened off-campus, Brown stationed an around-the-clock safety officer outside the Brown/RISD Hillel building, where Knafo worked raising awareness about Israel. Several Rhode Island Jewish organizations offered a $10,000 reward for information leading to the capture of the perpetrator. "We will do anything possible to assist students and staff who may fear similar acts," President Ruth Simmons wrote in an e-mail to the Brown community. "There is nothing more unsettling on a campus than to have acts that might seek to spread fear, intimidate, or harm individuals."

Several months later no arrests have been made and no official statements issued. Officially, police say they have not ruled out any possibility and remain uncertain whether the act was anti-Semitic violence or a prank by teens who may have had no idea an Israeli lived at the house they chose to firebomb.

"The investigation is still ongoing," says Providence Police Chief Dean M. Esserman. However, Esserman strongly suggests the firebombing was not a hate crime. "I choose my words carefully," he says. "It is not clear at all that they [Knafo and his roommate, Roei Bahumi '08] were the target of the attack." A law enforcement source close to the investigation puts it more bluntly—authorities "don't believe the individual [Knafo] was being targeted," he said.

According Brown's police chief, Mark Porter, witnesses "saw two individuals running away from the house. They described them as young kids." But Porter says neither witness saw the incident or could describe the kids.

Knafo, twenty-five, began working at Hillel last September on a fellowship from the Jewish Agency for Israel, a Jerusalem-based nonprofit that sends Israelis to the United States each year to lead workshops and educational and cultural events related to Israel. According to the group's Web site, the agency promotes emigration by Jews around the world to Israel. Megan Nesbitt, Hillel's interim executive director, says this was the first year the organization has sponsored a Jewish Agency for Israel emissary and that it plans to do so again when Knafo's fellowship ends in 2009. Hillel has had Israelis working there on other programs in the past and never had any problems, she says.

In the wake of the firebombing, "there was a sense of fear," she admits. "People wanted to feel safe."

On March 18 the University sponsored a community meeting at which Providence police briefed staff and students on the status of the investigation and encouraged them to share their concerns and feelings.

"It's very scary," Danielle Levine '09 said. "I like to think of the East Side of Providence and the Brown campus as very safe." Interim Vice President for Campus Life and Student Services Russell Carey '91 '06 AM also apologized for waiting until Sunday evening—a day-and-a half after the incident—before notifying the campus community. "We should have acted more quickly in providing information to the campus about the incident," Carey said.

With no new developments or breakthroughs coming in the case, however, students soon put the incident behind them, Hillel's Nesbitt says. She says the firebombing's timing—just before spring break—was fortuitious. "Students were able to walk away and come back and feel a sense of separation from it," she says. "By the time two weeks had passed, it felt distant." The guard posted outside Hillel's building was removed within a month, and Nesbitt says the only lasting changes will be such improvements to the building's security as better camera surveillance and better procedures for locking down the structure. But Nesbitt adds these were being planned even before the firebombing.

Knafo has since moved to another off-campus residence. He plans to travel to Israel this summer and return to Hillel in the fall. He says he has no fear something similar will happen to him again. "There are threats on people all over the world, and if we are afraid, we will never do anything," he says. "We have to keep living our lives."

Reader Responses to Disturbing the Peace