Sixty years ago, all but one U.S. medical school practiced racial segregation. To become doctors, African Americans not only had to endure the rigors of medical training; they needed to do so in a nearly all-white environment. To make the medical profession more accessible to blacks, Joseph Gayles Jr., a chemist and higher education activist, helped to found the Morehouse School of Medicine in 1975. Today, Morehouse remains one of the primary schools of medical education for African Americans. 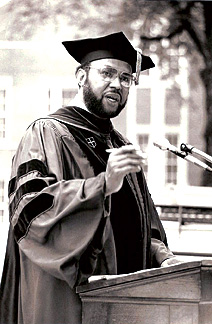 Courtesy Monica Dorcey
Gayles, who died at 71 of heart failure on Oct. 2 at his home in Atlanta, was born in Birmingham, Alabama, on Aug. 7, 1937. According to his daughter, Monica Dorsey, he spent time as a young man working at his father's appliance repair shop. After attending public schools, he won a full scholarship to Dillard University in New Orleans and in 1958 graduated summa cum laude with a degree in chemistry. He arrived at Brown on a Woodrow Wilson Fellowship, earned his doctorate, and then worked as a staff scientist at IBM from 1966 to 1969 before beginning his career as a chemistry professor at Morehouse.

In the early 1970s, Gayles became program director of the initiative that raised $60 million to found the Morehouse medical school. In 1977, he left Morehouse to serve as president of Talladega College, a historically black school in Alabama founded by former slaves.

When he returned to Morehouse in the early 1980s, he was determined to work for better access for blacks to medical schools. "It is a pleasure to be returning to my interest in medical education for health care and welfare of minority people, and to be assisting in the development of the Morehouse School," Gayles said in a press release issued by the medical school at the time. "It is my interest in the health care of people, especially minorities in rural and urban communities, that leads me to make this change after six challenging and rewarding years at Talladega."

According to his daughter, Gayles loved singing, painting, and photography. "My father was a remarkable man," she said. "He did so many things and seldom complained or boasted." He is survived by his son, Jonathan Gayles; two grandchildren; former wife Gloria; and daughter Monica Dorsey.

Reader Responses to Healing His People