One of these seasons the pundits are going to figure it out. Last fall, they chose the Brown football team to finish third in the league. Instead, the Bears won their second Ivy championship in four years and their third since 1999. What did all these teams have in common? Head Coach Phil Estes, who has been gradually putting up numbers that make him arguably the best football coach in the school's history. 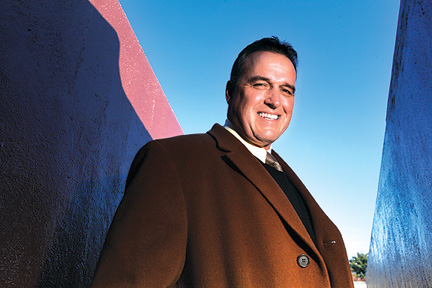 Scott Kingsley
Estes is not just a smart recruiter of players. He also knows how to shape his on-field approach around their individual skills.
Until Estes arrived on College Hill eleven years ago, Brown had won only a single Ivy League title in forty-two seasons. In fact, its Ivy peers did not take the Brown football program seriously until Mark Whipple '79 arrived in 1994. Up to that point, the Bears had accumulated a combined Ivy record of 132–211–10, for a winning percentage of .388.

During Whipple's four years as head coach, the Bears went 24–16. When Estes took over in 1998, he did even better, winning fifty games more quickly than any coach in Brown history, even the legendary John Anderson, who led the Bears from 1973 to 1983 and coached them to their first Ivy title in 1976.

In addition, thanks to Estes's versatile offensive approach, his teams scored 1,000 points faster than those of any coach in Ivy League football history. In Estes's first thirty-two games as head coach, his teams scored 1,022 points, for an average of 31.9 points per game. Overall, Estes has posted a 66–43 record (a .605 winning percentage) and an Ivy League mark of 47–29 (.618). No one in modern Brown football history has been able to approach this level of success.

Although Estes's first season, 1998, did not begin well—the team dropped three of its first four games—the Bears won their final six games to finish second in the league.

"The first championship," Estes recalls, "was just one of those things where you were in awe because it hadn't been done in so long. You saw the appreciation of alums, of players, of administrators. Everybody got involved. They tore the goalposts down. It was like something that had never happened before."

Estes admits that the early success overwhelmed him. "I felt I could just crumble to my knees and take it all in and enjoy it," he says. "I was so happy for so many people that I had heard from who didn't believe that Brown was ever going to get back on track."

The Bears topped that 1999 feat in 2005, when, for the first time ever, they won the Ivy title outright. And any remaining doubts about the quality of Brown football under Estes evaporated last fall, when the Bears were back on top again, this time sharing the championship with Harvard.

What is it about Estes's approach that has led to such great success?

"I think it all starts with recruiting," he says. "If you can recruit good talent that fits your philosophy and fits the school and they have great character, then you're going to have a successful football team."

Estes and his staff have grown to understand the type of scholar-athlete that thrives at Brown. "Not everybody fits an open curriculum," he says of his recruits. "We really want them to want Brown."

Sometimes a player comes along with lots of football talent, Estes adds, but with no feel for Brown's culture. Estes admits that earlier in his career, he might have tried to persuade that person to choose Brown anyway, an approach that he says rarely worked. "We have had guys that we've passed up because they didn't fit here at Brown. They didn't fit our philosophy. We won't settle for that."

Estes and his staff excel in getting the most out of their players and in keeping their on-field approach flexible. Estes has a keen eye for seeing players' potential, and rather than forcing them to adapt to a rigid system, he builds an attack based on the talents they are in the process of developing. For example, for the 1999 championship season Estes saw the chemistry between Ivy Player of the Year quarterback James Perry '00 and a slew of talented receivers and built one of the best aerial attacks in the nation.

During the 2005 Ivy title run, by contrast, Estes built his offense around running back and Ivy Player of the Year Nick Hartigan '06, who rushed for more than 170 yards a game. And during the 2008 season, Estes exploited the versatility of receivers Bobby Sewall '10 and Buddy Farnham '10, each of whom took on multiple roles with the team.

Estes is also a master motivator. In 2008 he kept the team sharp with the motto What's Important Now (WIN). The idea was to eliminate any talk of the past and to concentrate fully on winning the next game.

For example, Estes says, "The team never listened to any of the talk that we hadn't beaten Harvard in eight years. That thought was never in their minds. It was all about this year."

Even when the team stumbled, losing its only league game to Yale, Estes kept them focused. After a hard week of practice, the Bears dismantled Dartmouth, 45–16, then cruised past Columbia, 41–10, to secure the Ivy title.

"When I went into the locker room right after the [Columbia] game," Estes says, "and I had everybody together, and I looked around the room and I said, 'Who knew?' their response was, 'We knew.' That's what it was all about. They knew it. They knew they were going to win a championship."

Now the pundits know, too.

Reader Responses to The Estes Way