As summer whizzes by and the new academic year looms, here's a look back at some notable moments from the past year in Brown sports. 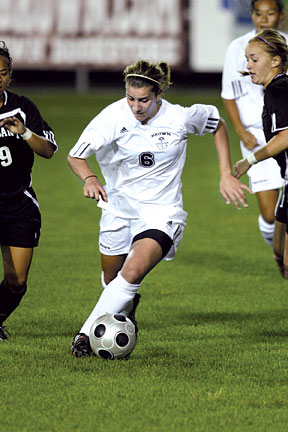 The first indication that the football team would be a contender last fall was its early-season defeat of Harvard, 24–22. As I noted in the September/October BAM, high-powered offenses have thrived under head coach Phil Estes. A successful season would depend on the defense holding up, and on September 27, the afternoon the Bears hosted the Crimson, the defense did just that. The Bears held a 24–16 lead late in the fourth quarter, but Harvard scored a touchdown with 1:03 left on the clock, bringing the score to 24–22. A roughing-the-passer penalty opened the door to the Crimson's attempt at a two-point conversion from the one-and-a-half yard line. As Harvard running back Ben Jenkins powered through the line, he was met by defensive lineman Jake Powers '09 and outside linebacker Miles Craigwell '09, who stopped him cold, preserving the Bears' lead.

MOST SURPRISING UPSET (2) As the men's hockey team entered the ECAC tournament in March, few observers expected much of them. That was before the Bears shocked Harvard and the rest of the collegiate hockey world with their performance in the first round. Seeded twelfth with only three wins in the regular season, Brown posted back-to-back shutouts, 1–0 and 2–0, against fifth-seed Harvard in Cambridge. It was the first time in Harvard men's hockey history—dating back to 1897—that the Crimson was blanked on consecutive nights on home ice. It was also the first time in ECAC history that a number-twelve-seed had defeated a fifth seed. Brown freshman goalie Mike Clemente '12 stopped an amazing total of eighty-six shots over the two games.

College baseball powerhouses tend to be based in warm states with lots of baseball weather. It's no surprise, then, that when the Bears pulled into Malibu late in March, they were facing a Pepperdine team ranked seventeenth nationally. What was surprising was the thrilling 20–8 pounding Brown administered. The Bears later followed it up by compiling a near-perfect 16–1–1 home record and set a school mark for Ivy League wins, with fifteen. 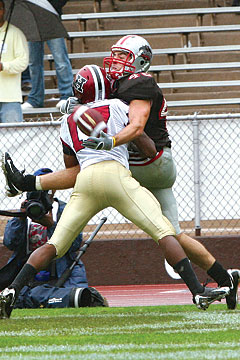 Buddy Farnham reaches around a Harvard defender for a one-handed touchdown reception.
MOST EXCITING RACE

The Yale women's varsity eight, ranked second in the country, entered its May 2 race against Brown undefeated. But the Brown women were not intimidated. The two crews battled stroke-for-stroke for 2,000 meters on the Housatonic River before Brown crossed the finish line one-tenth of a second ahead of the Bulldogs to retain possession of the Nat and Anne Case Cup.

In Minor League Mom, Pam Carey, mother of Todd Carey '93 and Tim Carey (Dartmouth '92), chronicles the journey of her two Ivy League sons through the Red Sox farm system. Todd, a Brown Hall of Famer, was an All-Star for the Trenton Thunder AA affiliate of the Red Sox and played AAA for the Pawtucket Red Sox before hanging up his cleats. The book offers a fascinating glimpse behind the scenes of minor league baseball as Carey traces her family's journey from Little League to AAA.

BEST IN THE CLUTCH

In the NCAA men's lacrosse tournament, Kyle Hollingsworth '09 scored with eight seconds left in regulation against Johns Hopkins to send the game into overtime. Brown had trailed, 11–8, with 7:24 left in the fourth quarter, but two goals by Thomas Muldoon '10 set up Hollingsworth's heroics. Unfortunately, Hopkins was able to advance when Brian Christopher scored just thirty-six seconds into overtime. 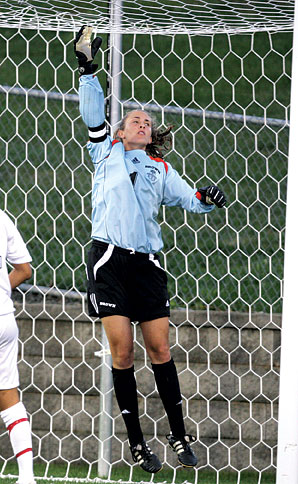 Tennis player Bianca Aboubakare '11 was a first team All-Ivy player in both singles and doubles; her sister Carissa '12, meanwhile, was the number-two doubles player and the number-four singles player for the Bears, who posted a 19–4 record, the best season since 1997. Football wide receiver Buddy Farnham '10 was a first team All-Ivy and All-New England selection and was ranked third in the Ivies with sixty-three receptions and 816 receiving yards. His brother Bobby '12 completed his first season on the men's ice hockey team, finishing in a tie for fifth on the squad in goals scored.

On September 14, during one of the most memorable weekends in women's soccer history, the Bears stared down the best team in the country and came away with a 0–0 double-overtime tie. To put the game in perspective, UCLA had outscored its previous five opponents by a combined 16–1 margin. Brown's Brenna Hogue '10 was outstanding in net, turning back a dozen shots. The Bruins held a 34–7 advantage in shots, including a 12–3 edge in shots on goal, but Hogue, bolstered by the Brown defense, helped preserve the shutout. The tie came two days after the Bears dumped Penn State, as described in Best Most Surprising Upset (1), above. 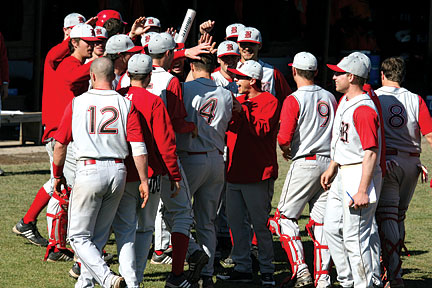 This has been the year of the goalie at Brown as several netminders have distinguished themselves. However, none has risen to the level of Jordan Burke '09, of the men's lacrosse team. Burke earned first team All-America honors and was recently drafted by the Boston Cannons of Major League Lacrosse. Also outstanding this year was Nicole Stock '09, who left Brown holding numerous saves records and who was a second-team All-Ivy and All-ECAC selection. Meanwhile, Brenna Hogue '10 (see Best Tie, above) and Jarrett Leech '09 each earned honorable mention All-Ivy accolades in women's and men's soccer, respectively. Leech posted five shutouts and a miniscule 0.87 goals-against average.

Reader Responses to A Last Look