When John Krasinski first read the script for Away we Go, he thought, "Oh, he's just a nice guy. I've played a nice guy before." But like everything else about this film—which both is and isn't what it seems—Krasinski's character is indeed a nice guy. Just not in the way you'd expect. 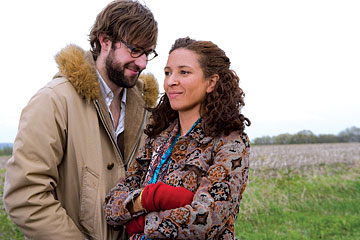 Both photos by Francois Duhamel/Focus Features
John Krasinki '01 and Maya Rudolph play a couple seek a "Huck Finn-y" home for their baby.
A collaboration between novelist Dave Eggers and Oscar-winning director Sam Mendes, Away We Go is a quirky comedy that will have you laughing so hard your stomach hurts. Yet its heart is as big and as complicated as any drama's. It's a movie about an unexpected pregnancy, but Krasinski recalls Mendes saying, "The one thing I don't want anyone to think is that this is a pregnancy movie." Over the course of the film, Krasinski's character—the big-hearted, just-a-little-bit-dopey father-to-be, Burt—manages to become a wiser grown-up without losing his endearing childlike earnestness.

Several Brown alums known for their work on critically acclaimed art films collaborated on Away We Go: Ellen Kuras (Eternal Sunshine of the Spotless Mind) was the cinematographer, Randall Poster (Darjeeling Limited) supervised the music, Sarah Flack (Lost in Translation) was the film's editor, and Josh Hamilton costarred. Kuras finds the Brown connection unsurprising: Brown "is not just academia for academia's sake," she says. "It's about how to create meaning. It's about people, and life, and living in the world." She believes that sensibility meshed perfectly with Mendes's vision of a story that will make viewers laugh and think at the same time. "Sam Mendes must have an inner inclination towards Brown students," Kuras says. "He likes to work with smart people. Smart people who are genuine, good people."

The story follows Burt and his longtime girlfriend, Verona (played by Saturday Night Live star Maya Rudolph), who, upon discovering that they're going to be parents, set off on a journey across North America to find the perfect place to raise their baby. They have a few criteria: they want to live near people they love, and they want the kid's childhood to be, in Burt's words, "Huck Finn-y." And away they go, to Phoenix, Tucson, Madison, Montreal, and Miami, where their visits with family and friends—played by Josh Hamilton, Maggie Gyllenhaal, Jeff Daniels, and others—provide hilarious comic fodder while raising deeper questions about what it means to belong and what constitutes a happy family. 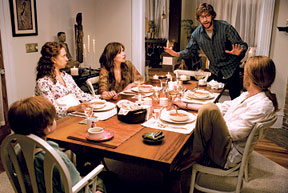 Maggie Gyllenhall, center, and Josh Hamilton '91, right, play the couple's rigid lefty friends.
Although Burt and Verona are in their early thirties, Away We Go is very much a coming-of-age story. Krasinski, who is twenty-nine, says, "These are the conversations I'm having every night with my friends: 'Did I make the right choices? Am I the kind of person I want to be? Am I ready for kids? Why am I not married yet?'" The two characters look tentatively to the other couples they visit as role models (and anti–role models), but ultimately keep coming back to the person they want guidance from most: each other. The movie works because "you really feel the love between the two main characters," says Poster. "I think that the palpability of that is really unique and powerful."

The film has an offbeat aesthetic and an obvious affection for the specificity of places. In each town the couple visits, the movie feels unmistakably there—from Miami's garish lights and riotous green to a sultry Montreal jazz club and Victorian houses. The sound track, which Poster and Mendes developed together, is plaintive without being morose, and includes more than one Bob Dylan song. Poster credits this to his recent collaboration with Todd Haynes '84 on the unconventional 2007 Dylan biopic, I'm Not There.

"None of the people from Brown who worked on this movie tend to work on very cookie-cutter movies," Poster says. "A lot of us have worked on mainstream projects, but we've all also cultivated and supported really artistic undertakings." And even with five Brown alums on the cast and crew, Poster says, "Sam Mendes was really the catalyst. He should really get an honorary degree for this one."

Reader Responses to Brown: The Movie