In new cities, most people sample the food, the art, and the music. I check out the libraries. 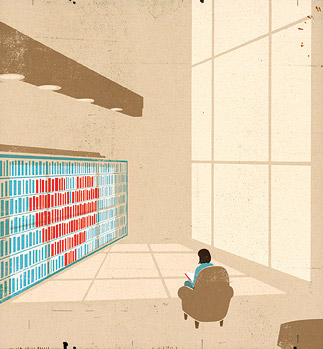 It started when I was a child. While I was in first grade, I flipped through books in the children's room of the Oakland Public Library, carrying them home by the bagful. My mother waited patiently, giving me her time, I think, because books had not been an option for her growing up in China.

By the fifth grade I had moved to the upper floors. Stacks were taller, ceilings higher, people at the tables older. Light streamed through the windows, time passed quickly, and night fell unexpectedly.

At Brown, I bought most of my books. My friends and I went to the library when the weather turned nasty, claiming our carrels on the second floor of the Rock. When the stereos in the dorms got loud and when the frat parties got going, we retreated to the library. Within those walls, we found refuge. Returning to campus years later, we stopped by the Rock and spied younger versions of ourselves in the reading rooms. We watched them silently through the glass.

In the decades since college, I have read and written for work. Covered with notes and knickknacks, my desk is now my refuge. But libraries still fascinate me. On a visit to Los Angeles, I ventured into the West Fifth Street library. If my parents had first settled there, I thought, this might have been my childhood haunt. Marked outside by Byzantine, Egyptian, Spanish, and modern influences, it is among the city's oldest educational and cultural institutions. Inside, large murals depict elements of early California history, and chandeliers grace the ceilings.

In Vancouver I went in search of good Chinese food but returned each day to the library on West Georgia Street. All exterior curves, the building resembles parts of the Roman Colosseum. It anchors what city planners call Library Square, commanding attention in a bustling neighborhood. Its architect, Moshe Safdie, changed my perception of what a city library could be. He redefined my ideas about community spaces. That weekend, dim sum and pan-fried noodles fed my body, but his building fed my mind. It satisfied a different kind of hunger.

Somewhere between Oakland and Vancouver the public library became more than a place for me to read and research. Once upon a time, it had been about function. Now it was a matter of form as well. In Boston my sister and I roamed Copley Square's classically ornate McKim building, experimenting with her digital camera. In Montreal, my brother and I wandered into the Grande Bibliothèque with its sharp lines and glass walls.

These days, I have been exploring libraries closer to home. I return occasionally to the Oakland Public Library. An afternoon at the movies in Berkeley often gets topped off with a visit to the library on Kittredge Street. Across the bridge in San Francisco, I spend time at the main library, a stone's throw from City Hall and the Asian Art Museum. Inside, natural light fills a central atrium, and the names of local authors are etched into art.

We think of libraries as houses for books, but they're so much more. They are full of discovery and adventure and beauty and delight. For me they're full of memories. I dream of calm spaces and big chairs, and a time in the future, perhaps, when I can stand by my own daughter as she picks through the shelves, as my mother did for me. I will take her there not because I couldn't go when I was a child, but because I could.

Christina Eng '91 is a writer in Oakland, California.