A Labor of Love

In 1998, while sitting on the board of Positive Alternative Choices Today (PACT) LA, a Los Angeles–based nonprofit agency for at-risk kids, Bill Ewald made a simple request of the program's director—he and the other board members wanted to see the organization's financial statements. The director, whom Ewald says was a defrocked evangelical minister and wore suspiciously expensive boots, took two months to comply with the request. And when he did, says Ewald, "He came back with an absolutely phony financial statement, and all of a sudden I was head of PACT." 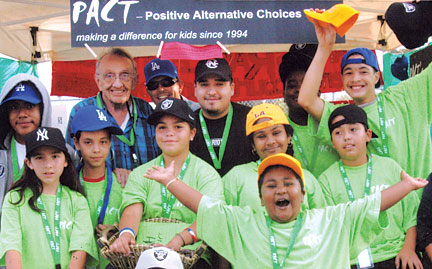 "They are learning to look you straight in the eye." Ewald says.
Courtesy Bill Ewald
For the next three years, Ewald, a former strategic consultant and government policy planner, worked out of the back of his car and from a booth in a local diner while he got the group's finances in order. By 2001, Ewald says, "we were clean," and now, with Ewald in his eleventh year as PACT's CEO and chairman, the organization is thriving.

What drew Ewald to PACT was its purpose: to help kids at risk of dropping out of school discover that honest work can be lucrative and fun. The program pairs low-income young people between the ages of 9 and 15 with adult mentors. Together they go door-to-door on the west side of L.A. selling newspaper subscriptions. Because the newspaper companies reimburse the group for every item it sells, the kids are paid $8 an hour for their effort.

Ewald estimates that the program's recruits have made two million knocks on doors in Los Angeles "without a single incident ever occurring." The group's website claims that only four of the more than 1,000 kids who have participated in the program have spent time in juvenile hall. "This is a wonderful experience for the kids to build their self-confidence," Ewald says. "They are learning to look you straight in the eye. They need to be able to answer questions, and they're seeing how other people live." The kids also perform community service four to five times a year, Ewald says, which teaches them "a little bit about giving back to their community."

Ewald believes that one reason so many inner-city young people end up in gangs is the scarcity of alternatives. Offering them jobs is a good one, he says, but he believes that antiquated child labor laws limit the effectiveness of groups like PACT. Ewald has launched an effort to amend the laws, which were first passed back in 1938 to eliminate exploiting kids in sweatshops. Ewald says the laws now pose too great an obstacle for nonprofits looking to place kids in jobs that could provide them much-needed work experience and money. (PACT now gets around these laws by getting written consent from parents).

According to Ewald, his cause found support in Congress, but then lost the legislators' attention after 9/11, when Washington's focus shifted to terrorism. Ewald now wants to renew his effort. No one represents the interests of inner-city teens, Ewald says, so, "we've had to make ourselves into a lobby for fifteen million children."

For more information about PACT, go to http://www.pactla.org

Reader Responses to A Labor of Love