It was a cry of despair as much as frustration. Nobel Prize–winning Nigerian writer Wole Soyinka said that the oppression to which Africans subject one another might be as bad as their oppression by whites during apartheid.

"I sometimes don't know which is worse," he said, "the direct, in-your-face degradation under apartheid or this more subtle, equally impudent and insolent degradation by people of our own skin or color." 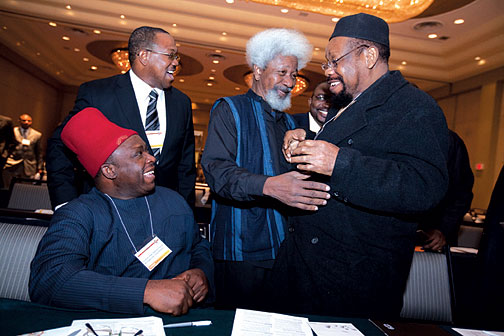 Soyinka's comments came at the Achebe Colloquium on Africa, a daylong gathering in mid-December of some of the world's most prominent experts on Nigeria. The event was organized by Chinua Achebe, author of the classic novel Things Fall Apart and one of Nigeria's preeminent writers. In September Achebe joined Brown's faculty as the David and Marianna Fisher University Professor and a professor of Africana Studies.

"I had no special qualification for calling you all together except for a very strong feeling that something was getting out of control" in Nigeria, Achebe told the audience. "So after complaining like everyone else, I said, 'Why don't you do something crazy? Why don't you call a meeting and let us talk about these problems?'"

Achebe and Soyinka joined a panel discussion about the upcoming February election for governor of the southeastern state of Anambra. In 2007, Nigeria's presidential elections were marred by widespread charges of corruption, violence, and ballot stuffing. The writers and their fellow panelists agreed that year represented a disturbing and major step backwards in Nigeria's democratization. According to human rights groups and election monitors, gang violence and political cronyism in Anambra had been particularly bad.

"It's no hyperbole," Soyinka noted, "to say that what happens in Anambra will provide a litmus test not only for the future of Nigeria or democracy itself, but for the very existence of Nigeria as a single entity."

Other panels during the day featured discussions on the nation's worsening image around the world, its strategic importance to the United States, and the challenges of monitoring elections in Africa's most populous country. The overwhelming consensus among the speakers was that Nigerian politics will be plagued with corruption for many years to come. As John Campbell, a former U.S. ambassador to Nigeria, noted, "It is too late to make the [presidential] elections of 2011 fair and credible. But it is not too late to reverse the downward spiral."

Even this will be tough, said Richard Cockett, the Africa editor of The Economist, because the last election for president was thoroughly monitored by international observers, yet vote rigging was widespread anyway. "There was no cost to rigging elections in Nigeria," he said. "They were cheating with impunity."

It fell to Achebe to provide the most optimistic outlook at the conference. "The solution seems to me to be clear enough," he said.

Achebe called for extensive and credible polling to take place before the elections as a way of determining whether the final results are enough at odds with public opinion to suggest corruption. He also called for the presence of international monitors at polling stations and tight security to prevent violence from erupting.

"Having peaceful elections is not beyond our reach," Achebe told the audience. "I believe we as a whole have the answers."

Click here to view video excerpts from the Achebe Colliquium on Africa.

Reader Responses to Beyond Cronyism