With high profile athletes like Pittsburgh Steelers quarterback Ben Roethlisberger getting hit with high visibility concussions this season, the topic seems to be on the mind of every sports commentator in America. Concussions have also drawn the attention of the U.S. Congress and of NFL Commissioner Roger Goddell. Some ex-players have even spoken out about the longstanding ethos that if you're conscious and aware you ought to get back in the game.

One of the leading active players on the issue is Arizona Cardinals wide receiver Sean Morey '99, who in October was named cochair of the NFL Players Association's newly formed Concussion and Traumatic Brain Injury Committee. "Fifty percent of concussions go unreported because of the loyalty players feel toward their teammates, coaches, and owners," Morey says. "Players want to earn their paychecks and win games, and they don't want to risk losing their jobs." 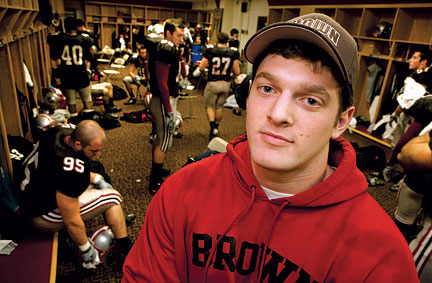 Defensive end Neal Rooney dismissed the early signs of his concussion. "I had no idea I even had it," he says, "I kept on playing."
Scott Kingsley
Morey's committee has two main goals: the diagnosis, treatment, and prevention of concussions and traumatic brain injuries in active players and research into the long-term cumulative effects of such injuries on NFL players.

"When I began researching this controversial topic," Morey says, "I was extremely concerned about retired NFL players suffering from a neurodegenerative condition found in athletes with a history of concussions."

Some of the research already done has produced staggering statistics. A University of Michigan study sponsored by the NFL showed that players between the ages of thirty and forty-nine suffered rates of dementia as much as nineteen times higher than the national average. Players who have had three or more concussions often suffer depression and mild cognitive impairment later on.

The U.S. House of Representatives Judiciary Committee conducted a hearing on the subject recently, and the NFL has responded with new concussion policies. Teams are now required to use an independent neurologist when treating players with brain injuries. In addition, the NFL has revised the rules on how quickly a player can return to the field after sustaining head trauma. Before the change, a player could return to a game after suffering a concussion if he was asymptomatic, both at rest and under exertion, and was cleared by the team doctor. Now, if a player is just woozy he is barred from returning to a game.

"Players deserve to know the truth about the risks of concussive episodes," Morey says, "so they can be more confident in allowing their trainers to do their jobs and protect players." With violent collisions a badge of honor in football, most players don't realize—or don't want to realize—how much of a threat concussions can be to their long-term health. In many cases, Morey points out, "Their quality of life has been taken away. It is our goal to restore it. Retired players do not have a voice."

Morey would also like to see a rule requiring a team to place on fifteen-day injured reserve any player who's been knocked unconscious and is unable to return to a game. What's more, he says, the league needs to keep improving helmets and adopt more objective technology to make sounder medical recommendations when clearing an athlete to resume playing. The NFL has a responsibility, he argues, to set a tone that will then trickle down through college, high school, and youth football programs.

"The end goal," he says, "is to educate players and to educate the coaches, parents, and athletes participating in football across our country—to change a culture."

The concern over football concus-sions is not new at Brown. This, for example, is the third year of a five-year study of concussions led partly by Professor of Orthopedics Joseph J. (Trey) Crisco, during which the football team has been wearing helmets incorporating Crisco's Head Impact Telemetry (HIT). Sensors in the players' helmets allow Crisco and colleagues from Dartmouth and Virginia Tech to collect data every time a football player at one of their schools gets hit in the head. Researchers at the three schools are looking at three different issues; Crisco is tracking the severity of each blow and its exact location on the helmet, research that could help pinpoint areas of the head that need the most protection.

And some team members have struggled with head injuries, particularly defensive end Neal Rooney '12. A year ago, early during his freshman season, Rooney experienced a mild concussion. "I had no idea I even had it," he says. "I kept on playing."

He doesn't remember if it was a hit in the Penn game or the result of a series of smaller hits whose cumulative effects had finally taken their toll. Looking back on it, Rooney says he remembers feeling "a little weird." He attributed the feeling as a general reaction to the rigors of college life and the demands of being an Ivy League student-athlete. After all, by the time he was done with classes, homework, practice, game-film study, and weightlifting, Rooney was getting to bed at two in the morning.

It was during the Penn game on November 1, he says, "when I noticed that things started to deteriorate rapidly." Back on campus, he found himself having trouble concentrating in classes. "I was in a constant haze. I was always foggy. I had some vision problems. It was a weird feeling where I look around and have trouble with certain lighting in crowded areas. I would get headaches. I was disassociating. I felt like I was dreaming constantly. A lot of odd things happened to me that I really didn't understand."

Yet he kept playing. At home for Thanksgiving, he was sleeping as many as fourteen hours a night. "I was having trouble communicating with people. I would try to put thoughts together in my head, and I just couldn't."

Rooney took an Impact Concussion Test to check his cognitive functions. When the results were compared to those of the baseline test he'd routinely taken back in August, it was clear he'd suffered a concussion.

He still hasn't recovered, although his long-term prognosis appears good, and doctors expect him to make a full recovery. But his experience underscores how common football concussions can be and how little the players out on the field understand them. Thanks to players like Morey and Rooney, both of those things may be about to change.

Reader Responses to Helmet to Helmet