Religion of the Pen

By Beth Schwartzapfel '01 / January/February 2010
January 7th, 2010
Brian Evenson has been compared to Stephen King, Edgar Allan Poe, and Raymond Carver. The New York Press compared him to Gabriel García Márquez "on really really bad acid." The Believer compared him to Cormac McCarthy: "Blood Meridian boiled down to an oozy ichorous syrup." "My work is so eccentric," Evenson says. "It's pretty much in its own place."

With the publication of last summer's short story collection, Fugue State, and this fall's creepy novella, Baby Leg, Evenson returns to the brutality, violence, and apocalyptic preoccupations that marked his previous seven books of fiction. These stories may not be for the faint of heart, but they grapple with such eternal themes as loneliness, language and its limitations, memory and its unreliability, and the dangers and comforts of community and religion. 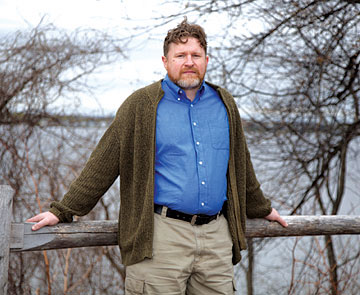 Brian Evenson explores the dark side of religion.
Denny Moers

Fugue State is populated by cannibals, murderers, plague-addled looters, ghosts, and a one-eyed, flesh-eating monster. The plot twists may be outlandish, but the writing is brutally precise and replete with references to Heidegger, Hegel, and Nietzsche. For his 2002 novella, Dark Property, Evenson culled obsolete words from seventeenth- and eighteenth-century books.

"I'm interested in the way that language defines us as human beings—what it means to experience something, and what it means to be human," he says. "One of the reasons for both the violence in my work and the stripped down style of the prose has to do with thinking we can maybe see things better when we strip all the other things away. It's in extremes that we understand being human."

Evenson, who has a PhD in critical theory, joined the Brown faculty in 2003. Raised in Utah, he was a deeply committed Mormon, an ecclesiastical leader in the Church of Latter Day Saints, and assistant professor of English at Brigham Young University. All that was threatened when his first book, Altmann's Tongue, came out in 1994. Its graphic, unflinching violence led the Brigham Young administration to suggest that he stop this type of writing if he wanted to keep his job. Evenson resigned and was later excommunicated.

No longer religiously affiliated, he says he's "never looked back." Yet his work is preoccupied with churches in general and Mormonism in particular. His 1998 Father of Lies describes a church's cover-up when one of its members rapes and murders children. The protagonist of his 2008 novel, The Open Curtain, is a teenager obsessed with the Mormon doctrine of blood atonement underlying a 1902 murder.

While Fugue State has its share of false and murderous messiahs, what sets this new collection apart is Evenson's portrayal of emotion. In some of these stories the greatest pain is caused by the limitations of language itself. "Mudder Tongue," by far the strongest story in the book, is about a man with increasingly severe aphasia. The power of the story's denouement comes not from violence—which hovers nearby but never actually comes to pass—but rather in the man's wordless exchange with his devastated daughter.

When The Open Curtain was published in 2006, Evenson said it would be his last book about Mormonism, but he is sketching a new novel, he says, "about a kid in Utah who's older and who ends up getting into some trouble." Titled Handbook for a Future Revolution, it will be "more of a sedate book" than The Open Curtain, Evenson says.

As a Mormon church member, Evenson says, "I felt like I had to make a choice between my writing and my religion. I felt very panicked, like I was potentially going to hell." Now that he's left Mormonism behind, he says, "Writing is very much like religion to me. I'm faithful to doing it, in an almost ritualistic way."

Reader Responses to Religion of the Pen