By David Shenk '88 / January/February 2010
January 7th, 2010
Trying to distill an 80,000-word argument into five or six words can sometimes have its drawbacks. Early one morning about twelve years ago, I found myself in a radio studio in Berkeley, California, chatting off-air with the morning talk-show host right before the program was to start. Nice guy. I could tell right away that he'd actually read most of my book, Data Smog, which is fairly unusual—no daily host can read everything, after all. And he seemed to get it. We talked in some detail about the idea that, amid all the undeniable opportunities presented by the vast proliferation of information in the Internet age, we also face some very serious new challenges: overwhelming distraction, hyper-specialization, and a coarser society in which marketers would be compelled to ratchet up the volume to grab public attention.

Then the host held up his hand and switched to his radio voice.

"Good Morning, Bay Area," he said. "David Shenk is with us this morning. He's written a fascinating new book which basically says that the Internet is a giant hoax."

I thought I was going to swallow my tongue. 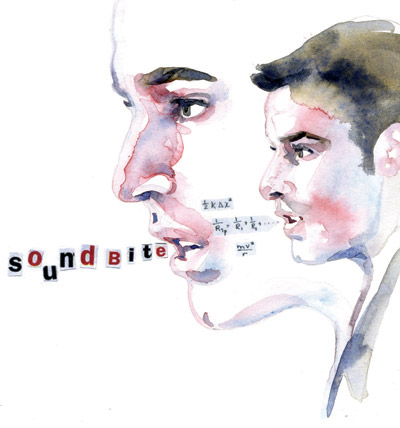 This was not the first or last time I would have my ideas mauled by the media. Writing about science and technology, I realize it comes with the territory. I learned at Brown that two or more contradictory notions can be true at the same time, but try explaining on the Today show that Alzheimer's is and isn't genetic, or that privatized science both helps and hurts us. Fitting nuanced ideas into high-velocity sound bites is like trying to step into a car that's speeding by at sixty-five miles per hour.

Perhaps this is what makes so many academics averse to communicating with the general public. After all, you are bound to be misunderstood. If you spend your life in a world of books and ideas, there's nothing worse than sitting in a chilly, windowless room staring at your own face on a TV monitor while someone with a waxed face and a very crisp shirt sums up your life's work with the line, "Thank you, professor, for showing us how debt markets spur marital infidelity."

The other option is to have someone like me serve as the middleman for your ideas. But academics generally don't cotton to that either. After decades of being rewarded for going deeper and deeper into subtleties, why would scholars want their work dumbed down? My own experience in trying to do this in front of large academic audiences went well—if you compare it to periodontal work.

But we simply need this to happen. More than ever, we need public intellectuals willing to bridge different worlds. As complexity threatens to overwhelm us, an increasingly distracted public needs to understand how genes really work, how markets can be both encouraged and reined in, how history teaches us about politics. We need to understand at least a little about how our tiny computers work so we don't become alienated from the tools that regulate our lives.

Whether we like it or not, we need more sound bites—and more creative metaphors and clever narratives. Intellectuals should spend as much time tuning their work for public consumption as they do composing for their own kind. This might put idea-middlemen like me out of business, but it would help make the world safer, more prosperous, and less prone to demagoguery.

David Shenk is the author of five nonfiction books and is a correspondent for TheAtlantic.com. His next book, The Genius in All of Us, will be published in March.