By Lawrence Goodman / January/February 2010
January 7th, 2010
If students once found a cause in banning the bomb, this generation is out to ban the bottle. The disposable plastic water bottle, that is.

A group of environmentally minded students has launched Beyond the Bottle, a campaign on campus aimed at reducing and eventually eliminating bottled water at Brown. The students argue that the bottles are not only environmentally destructive; they represent a dangerous trend toward selling something that is in many cases already a public resource. 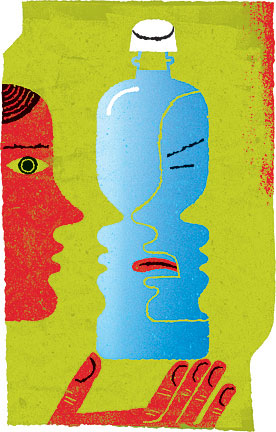 Bottled water is an $11 billion dollar U.S. industry; Americans consume 8.7 million gallons a year, up 85 percent since 2000. Environmentalists say too many of the bottles end up buried in landfills, and manufacturing them requires burning more than a million barrels of oil a year, adding to global warming.

The students' biggest success so far has been winning over Brown dining services. Last April, the group ran a pilot program out of Josiah's Cafe, putting up educational signs and inviting students to a taste test comparing bottled and tap water. According to Jason Harris '10, one of the campaign's leaders, the result was a 40 percent drop in bottled-water sales.

As of December, officials had agreed to post an anti–water bottle notice at three locations on campus: Josiah's, the Ivy Room, and The Gate. The sign, which reads "Fact: 40% of bottled water on the market comes from municipal water systems," was a reminder that a lot of bottled water is just tap water.

Student volunteers have also manned tables on the College Green, asking peers to sign a pledge to refrain from drinking bottled water and to support a better public-water system. Brown officials have also set up a campuswide task force to look at ending the University's use of bottled water. Suggestions include providing speakers with a pitcher of tap water instead of water bottles and finding alternatives to the tens of thousands of bottles Brown keeps in reserve in case of a disaster.

Gretchen Willis, director of Brown dining services, says reducing bottled water sales is more difficult than it seems. Because it's a high-markup item for her office, any fall-off in sales means less revenue. She also says nutritionists who work with dining services worry that a lack of bottled water may lead students to drink such less healthy alternatives as soda or fruit juice. Yet Willis believes in the cause: she gave up bottled water two years ago.

Bottled water has only been a craze for a decade, says Ari Rubenstein '11, one of the campaign's leaders, so "this is really all about going back to what Brown did for literally hundreds of years, except we want to do it even better."

Last year two schools, Washington University in St. Louis and Belmont University of Nashville, took the extraordinary step of banning the sale of water in plastic bottles anywhere on campus. Brown students are aiming for a more gradualist approach that would focus on educating people about the true cost of water bottles and improving access to alternatives, such as water fountains.

"We thought Washington University's ban was a cool concept, but it was also too top down," says Jason Harris. "We wanted to see if we could get people to change their behavior first.

Reader Responses to Tapped Out