Born in western Nigeria, Chief Emmanuel O. Ashamu was the son of a Yoruba tribal chief. After graduating from pharmacy school in 1951, he rose to become one of most prominent businessmen in Africa. A devout Christian, Ashamu was the patriarch of a large extended family and a revered leader in his community. 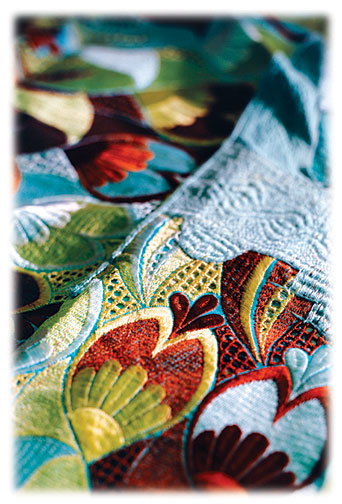 Shortly before his son Samson '79 graduated from Brown, the chief and his wife donated the money to build the Ashamu Dance Studio, which was dedicated on April 21, 1979.

Throughout the 1980s, Samson and his wife, Leslie, donated various religious costumes, ceremonial robes, and other material to the Haffenreffer Museum of Anthropology. Samson Ashamu died on July 20, 1995, two years after his father had passed away.

Last year some of Emmanuel's ceremonial robes and fabrics were given to the theater department for preservation. The collection includes eight pieces of fabric, two hats with hand stitching, and a four-piece ensemble of t-shaped tops, drawstring pants, and a caftan.

Embroidered in hues of blue, green, and brown, the robes are typical of the style worn in the area of Nigeria where the Ashamu family lived. The pieces are characterized by their intricate, hand-embroidered details. Clearly this was a man in love with joyous color.

Reader Responses to Threads of Color