Just before Valentine's Day, Jeanne Jeong '12 received an intriguing e-mail. "Want to hear something exciting?" it read. "One of your peers has expressed romantic interest in you." The e-mail was from Prospect & Meeting , a new dating website created by four Brown undergrads seeking to take the guesswork out of College Hill flirting. 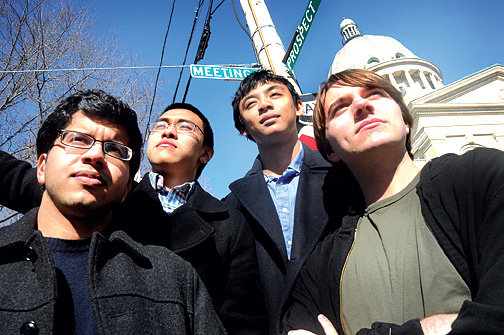 Frank Mullin
Left to right: matchmakers Arune Gulati, Kai Huang, Ben Martadarma, and Bryan Tyler Parker at the site of their inspiration.
The brainchild of juniors Kai Huang, Ben Martadarma, Bryan Tyler Parker, and Arune Gulati, Prospect & Meeting (like the streets—clever, no?) allows users to list up to five "crushes," whom Prospect & Meeting automatically e-mails and directs back to its website, where they're prompted to register and list up to five crushes of their own. If two registered users list each other, each receives the other's name and contact information. The couple is then on its own.

"There are a lot of missed connections at Brown, because people are generally shy," says Huang, an economics and human biology concentrator who conceived Prospect & Meeting after a failed crush of his own. "They need help making the first move."

The idea of a college dating site isn't new—Facebook began at Harvard as a rudimentary matchmaker called Face Mash, and the Princeton-based GoodCrush.com has been setting up students at several dozen colleges since 2007. But Prospect & Meeting's founders hope its local roots and narrow focus—users must have a brown.edu e-mail address—will shake up Brown's dating scene. In its first week, the site registered more than 1,000 users and made more than 200 connections, says Martadarma, a computer science concentrator who is the site's lead programmer.

"I don't know how many of those are genuine," he admits. "I'm sure some people just list their boyfriends and girlfriends for fun."

"I think it's a great idea," says Phil Kaye '10, who appeared in a promotional poster for the site. "College hookup culture is so extreme these days, and there's something appealing about the idea of an innocent crush. [The site] plays the role of your giggling best friend on the playground."

"I want every undergrad on campus to get listed," Huang says. "Even the most dejected, antisocial person at Brown is being watched by somebody."

Asked if anyone had listed him as a crush, Huang laughed. "Not yet," he says. "But today I was in class with a girl, and I pitched her the idea of the site. I think I caught her looking back at me during the lecture." After class, Huang logged on to Prospect & Meeting and added the girl to his top five. "I hope I get an e-mail soon," he says.

As for Jeong, she's going to stick to the tried-and-true dating scene. After receiving her Prospect & Meeting e-mail, she mass-texted a group of friends: "Which one of you listed me on this?" After receiving no response, she deleted the alert. "Even if I did find a match, it's too awkward," she says. "What would we tell our grandkids? That we met through this online dating service because I was too scared to talk to him?"