What did Stephen Sondheim learn from Leonard Bernstein? 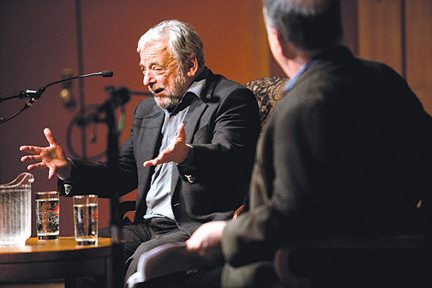 Scott Kingsley
Sondheim gestures during his talk with Frank Rich. The intensely private playwright visited Brown as part of a public speaking tour.

"If you're going to try anything, try something big," Sondheim told the rapt audience during a visit to Brown in February. "Make a big failure. Big failures are dignified. Little failures are shameful."

Sondheim has followed this credo from the lyrics he penned for Bernstein's West Side Story to the music and lyrics he's created in such masterpieces as A Funny Thing Happened on the Way to the Forum, Sweeney Todd, and Into the Woods.

Along the way, Sondheim has had innumerable successes, winning a Pulitzer prize and nine Tony awards. But the hour-and-a-half conversation he had on the De Ciccio Family Auditorium stage with New York Times op-ed columnist Frank Rich focused largely on his flops and failures. Sondheim and Rich, a former Times theater critic, have been holding public Q & A sessions around the country. Their evening at Brown provided rare insight into how the intensely private Sondheim overcame setbacks to achieve greatness.

When Sondheim was in his thirties, he worked as a lyricist with composer Richard Rodgers on the musical Do I Hear a Waltz? Sondheim said he undertook the project at the urging of his longtime mentor and Rodgers'frequent collaborator, Oscar Hammerstein II. According to Sondheim, on his deathbed Hammerstein asked him to work with Rodgers.

"Dick is going to feel bereft when I'm dead," Hammerstein told Sondheim. "If any project comes up that is in any way possible, I wish you would write it with him." Sondheim agreed, and the result was Do I Hear a Waltz?, which opened on Broadway in 1965 to mixed reviews and never recouped its investment—one of the few Sondheim works that have not endured.

"You write for love and for no other reason," Sondheim said. "You don't write for money or to pay off favors. That was an enormous lesson to learn."

Merrily We Roll Along, Sondheim's musical about losing one's soul in show business, opened in New York in 1981 to negative reviews and closed after sixteen performances. Rich said audience members were walking out during the production.

"The real problem is that it's about a very unlikeable character," Sondheim said. "I happen to like that kind of character, but audiences generally don't." He and George Furth, who wrote the book, worked on and off for the next twelve years to improve the musical and make the lead character more appealing.

By all accounts, Merrily has improved immensely. The Kennedy Center in Washington, D.C., staged a major production in 2002 starring Raul Esparza as the lead. Sondheim said it is now in pre-production for a New York City revival in the near future. "You get a chance to work on things and make them better," Sondheim said. "Any work of art that gets a chance to be exposed for any time finds its level, like water."

Sondheim's notoriously difficult music is marked by dissonance, abrupt transitions, and witty, complex lyrics that can easily leave a singer tongue-tied. But the composer portrayed himself mostly as a craftsman who uses a few simple principles to guide him: content dictates form, less is more, God is in the details, and clarity above all.

He has an intense dislike for Noel Coward: "All his jokes are about people's physical anomalies and sexual habits. It's the kid in the back of the room snickering at you."

His favorite musical: Porgy and Bess

Reader Responses to Why Write?