Emily Timm considers herself shy, which is strange since she spends a good deal of her time in showdowns and shouting matches with beefy bosses in the construction industry. Timm, a labor organizer in Austin, Texas, says she's had employers storm out of the room screaming, tear up documents in her face, and threaten her. Despite all this, Timm manages to hold her ground. 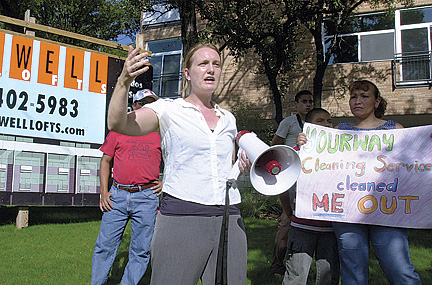 John Anderson
Timm protesting on behalf of cleaning workers in August, 2007.
Timm is a policy advocate for the Workers Defense Project, a nonprofit committed to raising wages and improving working conditions for low-income employees. Since it was founded in 2002, the organization says it has recovered more than $575,000 in back wages for area laborers and has successfully advocated against an Austin City Council bill that would have made it illegal for immigrants and day laborers to solicit work in public spaces. Timm, who started at the agency five years ago, focuses on the construction industry, which accounts for 85 percent of the complaints it fields. She's worked on legal cases, organized vigils for victims of fatal work accidents, led rallies, and spearheaded public relations campaigns against negligent employers. "I feel like I've learned so much from the workers who've come in and shared their experiences," Timm says. "I can't believe how much workers have been willing to sacrifice, taking days off to take part in actions, meeting with City Council members, and running the risk of being blacklisted by construction companies."

During her junior year at Brown, Timm travelled to Brazil, where she was able to meet several leaders of local advocacy groups and protest movements. They became role models for her, she says. At Brown, she also studied participatory democracy in her thesis work, mentored by sociologist Patrick Heller. In her research, she says, she learned that "people who are living through oppression are the ones who need to be the leaders in winning change."

Timm started out working for a social service agency in her home state of Maryland and moved to Texas when a friend persuaded her to work with her at Casa Marianella, a shelter for recently arrived Latin American immigrants. "Growing up on the East Coast, I never thought I'd move to the Southwest," Timm says.

As more and more immigrants came through its doors complaining about unfair labor practices, Casa Marianella decided it needed to give voice to these complaints and started the Workers Defense Project. Timm says construction workers in Austin often get no rest or water breaks, have to use unsafe equipment, and face employers who work them hard, then don't pay their wages. In response, WDP has started classes that teach workers about the history of the American labor movement and local and national laws. There are also classes in leadership so the immigrants can go back to their communities as organizers.

Timm will also go and meet with employers and negotiate a settlement on behalf of a worker whose salary is in dispute. In extreme circumstances, she will help to organize strikes, take the workers' grievances to City Hall, and launch public campaigns to shame the business. Recently, Timm got a manager to sit down and agree to listen to the complaints of roughly a dozen workers. They spoke of barely being able to get by on their wages and of unsafe conditions at work sites. Eventually, the manager relented.

Last summer, WPD's efforts got the federal government's Occupational Safety and Health Administration (OSHA) to send out 60 investigators to inspect over 2,000 work sites. More than $2 million in violations were issued. "I would go out to work past the neighborhoods where I had never seen anyone wearing a harness or a hard hat," Timm says. "Then I actually saw people using the equipment—equipment employers are supposed to provide."

Reader Responses to Fighting Back