What's the secret to great fudge? "Using the finest ingredients, a large kettle, and a lot of love," Lucinda Danziger Gregory says. She should know. For the last thirty-five years, she has been waking up at four in the morning and preparing the confection at her store The Chocolate Barn in Shaftsbury, Vermont. She's not about to reveal the ingredients in her fudge, but she does advise this—"Without the love, the fudge won't come out the same." 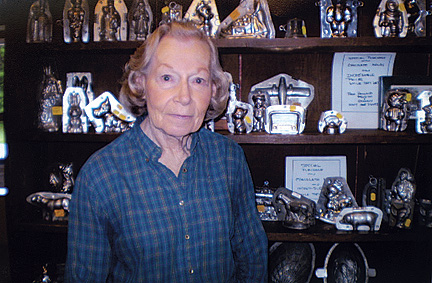 Gregory double-majored in art and biology at Pembroke and after graduating worked as a medical illustrator. She married in 1955 and together she and her husband, John, started an employment agency in Connecticut. But in the mid-seventies, the couple happened upon a rustic brown barn nestled in the mountains of Vermont. There was already a chocolate store in the barn and the Gregorys decided to buy it. Gregory says it was not a love of chocolate that motivated her, but a zest for adventure. "Meet the world with confidence and a mind open to all possibilities" was and remains her attitude, she says. "Accept what's out there and make it work."

Almost as soon as she opened, Gregory began making regular pilgrimages to Europe to hunt down the traditional metal molds used there to make chocolate. She found them at antiques stores and flea markets. Over time she has collected more than 800 19th-century molds shaped like Santa Claus, the Easter bunny, lions, tigers, bears, Jack-O-Lanterns, Thanksgiving turkeys, and trains, and buses. She believes she has "the foremost collection of antique chocolate molds in the country."

Gregory began creating handmade treats ranging from coconut bonbons to chocolate mousse to maple-cream chocolates—some fifty varieties in all. Once word got around about her fudge, tourists in the area began flocking to her store. Gregory was widowed in 1982 and became the company's sole owner, ultimately expanding to Martha's Vineyard and two other locations in Vermont—the town of Shelburne and the Stratton Mountain Ski Resort in the south. "What a wonderful way to spend thirty-five years," Gregory says. "Making people happy and loving every day."

Gregory sold The Chocolate Barn this year and is writing a cookbook tentatively titled, Begged, Borrowed, and Stolen from the Best. She says it will be a collection of old family and other recipes she gathered during her travels through Europe.

So writing has become the eighty-two-year-old Gregory's fourth career. She attributes her desire to take risks to a piece of advice former Brown president Henry Wriston gave at Commencement: "If you go through these gates having great knowledge, that's part of it. If you leave knowing how to continue to learn, we will have done our job.

Jessica Bengels is an attorney living in East Hampton, N.Y.