If they were intimidated, they didn't show it. Sixteen first-years—having read The Dew Breaker by Edwidge Danticat '03 MFA over the summer—gathered in a Salomon Center classroom Monday morning to discuss the book. A few exchanged pleasantries; some took out their books. Then, in walked their instructor: President Ruth Simmons. 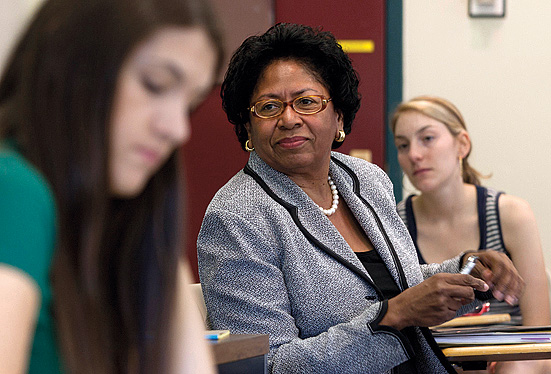 "I did a double take," said Maggie Tennis '14. "I never dreamed she could actually be leading our discussion."

Now in its fourth year, First Readings is designed to introduce incoming students to academic life by giving them a common reading experience. Over the summer, members of the class of 2014 received a copy of The Dew Breaker, which weaves together seven narratives illustrating Haiti's painful history, and wrote reflections about the book to their academic advisers. Simmons was one of eighty-eight faculty members and administrators who'd volunteered to teach a First Readings seminar.

Simmons opened the session by asking students to introduce themselves and summarize their perspectives on the book. Was it successful as a work of fiction? Would they recommend it to others? Not surprisingly, most of them answered yes to both questions. During the ensuing discussion, the group touched on topics of transformation, redemption, and empathy.

Though initially surprised, most students later said that having Simmons as a seminar leader helped them appreciate the material even more than they had over the summer.

"I like that President Simmons is the kind of president who will sit down and have an intellectual discussion with a small group of freshmen," said Emily Chu '14."It felt really personal and engaging. I liked that she led us through the discussion without putting words in our mouths, and she respected and welcomed our thoughts."

Simmons concluded the class by connecting the discussion to the importance of a liberal arts education. "Why is it that we take the time to read closely? To experience art and literature?" she asked. "What is it about writers and artists that they are held in such high regard? It's precisely because of the mirror they hold up. And when they do their job exceptionally well, we are going to feel perplexed."

Such is the purpose of art, she said: "To edify us. To educate us. To really draw us in so that we can understand life better."

Reader Responses to Professor in Chief