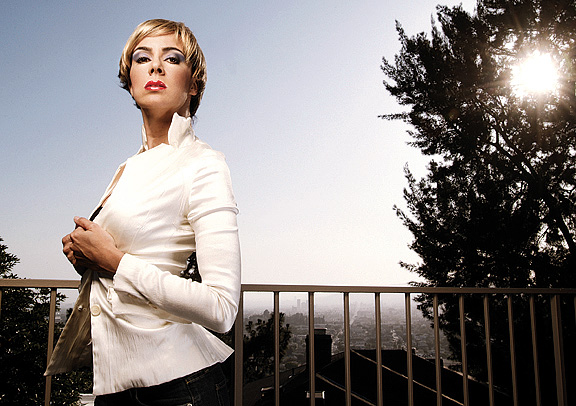 Iris Bahr '98 is not a whore, but she plays one on TV. As the executive producer, writer, director, and star of the comedy series Svetlana, which premiered on the HDNet cable network this summer, Bahr portrays Svetlana Maksimovoskaya, "America's favorite Russian prostitute and political consultant."

The outspoken mail–order bride turned madam is inspired partly by the Russian prostitutes Bahr sees on the streets of L.A., where she's worked as an actress and stand-up comic for the past decade, and partly by the Russian immigrants she's encountered in Tel Aviv, where the Bronx-born Bahr spent her teens and served in the Israeli army.

But Bahr and her Soviet alter ego didn't gel until Bahr posted a self-produced pilot for Svetlana on FunnyorDie.com. The thirteen-minute episode drew tens of thousands of hits, prompting HDNet president Mark Cuban to offer Bahr a series. He ordered twelve episodes for the first season and gave her complete creative control.

"He was willing to take a risk and let me do my thing," Bahr said this summer via Skype from Tel Aviv, where she was writing scripts for the show's second season. Bahr's "thing" is part lowbrow sex comedy, part political satire, and all uproariously funny.

The show revolves around the daily operations of the St. Petersburg House of Discreet Pleasure, a brothel serving high-profile political clients from Ahmadinejad to Al Gore. Svetlana runs the business out of the family's Hollywood bungalow with her husband, Vlad, and their three "daughters." "We are located in private residence," Svetlana touts in a heavy Russian accent, "so you won't be coming to whore house. You'll be coming to whore home."

The show is as much about the family as it is about the family business. In one episode, Svetlana poses as an Orthodox Jew to try to get her nine-year-old son, Boris, into a Yeshiva School. In another, the family tries to go green after Svetlana receives a personal letter from Michelle Obama (whose husband is a client). And while there's lots of sexually explicit humor, the show is anything but sexy. "In a way, any comedy about sex can't be sexy," said Bahr, who plays the show's sex scenes as unsexy and awkward physical comedy.

The lack of heat seems to have been lost on HDNet, which programs Svetlana as part of its Thursday "Guy's Night In" lineup, sandwiched between the big breasts of Girls Gone Wild and the skimpy swimsuits of Bikini Destinations. Bahr has no complaints about the time slot, though.

"Svetlana is a world apart from those shows," she says. "But 'Guy's Night In' is their highest-rated night, so if it's all about boobs before and boobs after, that's fine with me."

Michelle Walson '99 is the producer of RISK! (www.risk-show.com).

Reader Responses to Sex and Politics