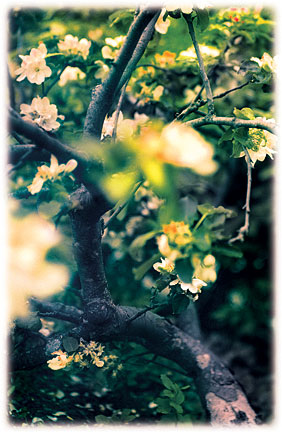 At the start of Physics 7, the introductory course for concentrators, the professor brings in apples. Not just any apples, either. These are descendents of the apples that Sir Isaac Newton credited with inspiring his theory of gravity. They're from a tree that physics professor Humphrey Maris planted twelve years ago by the corner of Barus and Holley lab, where the physics department is located.

Legend has it that the young Isaac Newton had fled London to avoid the plague, and was staying at his family's home at Woolsthorpe Manor in Lincolnshire, England, when he observed apples dropping in the garden. Every one of them fell straight down—not off to the side or up into the air—which led him to wonder what force might attract the apples to the earth.

Brown's tree is a graft of a descendent of Newton's apple—an antique strain called "Flower of Kent"—on a dwarf apple's rootstock. Maris says he was concerned that a full-size apple would outgrow the spot in which it's planted, but this one is tiny, almost shrublike. "There are degrees of dwarfishness," Maris says with a smile, "and I wish I'd chosen one a little taller."

Still, it's pretty in bloom and it bears apples in time for physics class. Nursery catalogs describe the fruit as mealy and flavorless, but Maris disagrees. "It's not bad," he says.