Pang Houa Moua '04 has a distinctive qualification for aiding refugees. As a child, she was one herself. 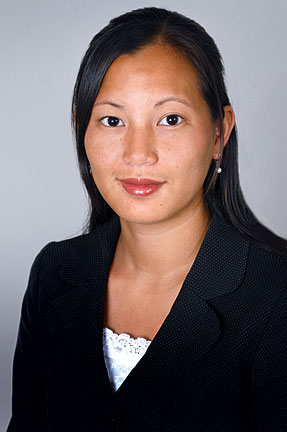 Courtesy Houa Moua
Moua understands the plight of refugees inside and out.

Moua, who is Hmong, was born in 1981 after her parents met and married in a refugee camp in northeastern Thailand. They'd fled to the camp from Laos in 1979 after the Vietnamese-backed Communist government targeted them for having been U.S. allies.

When Moua was four years old her family moved to the United States, first to Appleton, Wisconsin, and then to St. Paul, Minnesota, which has one of the highest Hmong populations in the nation. Her father's uncle, who had resettled in America a few years earlier, sponsored the move. Some of Moua's relatives were not so fortunate: they were killed while trying to flee Laos for the safety of the refugee camps. "The saddest thing about the war is that it separated families like mine," Moua says.

Life in the United States wasn't easy for Moua and her family. Her parents worked tirelessly on assembly lines, her father inserting toys into vending machines and her mother sealing packages. They earned minimum wage and supplemented their jobs picking blueberries and cucumbers on farms during the summer. Until Moua's parents could afford their own place, they lived with Moua's great-aunt and great-uncle and the couple's five kids in a three-bedroom home.

Adjusting to U.S. culture was traumatic at first, but, once Moua mastered English, she began to excel at school. At Brown she concentrated in American Civilization while trying to learn as much as possible about the history of both Laos and her family.

"Before I left for college," she says, "I was in a city with one of the largest Hmong populations in the world. Then I was in a place [Brown] where there were only five or so Hmong students. I took classes and began reading about my roots."

As a freshman, Moua took a course on southeast Asian refugees that helped her understand what her family's trials. Then came a nonfiction-writing course that focused on the Vietnam War. She interviewed her parents for one of her papers.

"Growing up," Moua explains, "I had heard my parents' stories about the war and what they experienced while they were escaping. But I didn't really have a context as to why they had to leave. Because of these classes, I was able to piece together the narrative of my parents' escape."

After graduating, Moua went to work at a number of organizations that promote social justice for Asian Americans. "I knew that I wanted to give back to my community," she says. In 2005, she became director of community education and outreach for the Asian American Justice Center (AAJC), a Washington, D.C.-based organization that focuses on advancing human rights for Asian Americans living in the United States.

In 2010 Moua became director of communications for the D.C.-based Southeast Asia Resource Action Center (SEARAC), an organization that aids communities of former refugees from Southeast Asia. SEARAC is a policy and advocacy nonprofit that tries to help local refugee communities develop strong leadership. "We are helping these refugees rebuild their lives and their communities in their new home," she says.

Moua, who lives in Washington with her husband, Alex Toy '04, says she's sure she will always work with former refugees or some disadvantaged group. "The thing is, my story is not a unique one among the many millions of Asian Americans who live in the United States," she says.

Reader Responses to Giving Back