Somewhere Between, produced and directed by Linda Goldstein Knowlton '87; with music by Lili Haydn '92. 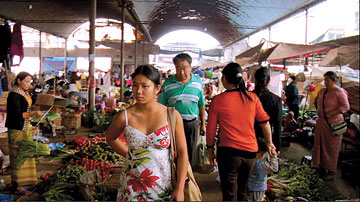 Courtesy Linda Goldstein Knowlton
Shopping in a Chinese market, an adoptee named Fang, center, wonders where she came from.
Who am I? It's the question that dogs every teenager, but perhaps none as painfully as those adopted by parents of a different race and culture. For these teens, the search for identity is often not merely a matter of cliques or clothes or values, but a primal disconnect between nature and nurture: Am I the child of the parents who gave birth to me, or the parents who raised me? Am I here, or there, or somewhere in between?

When filmmaker and former neuroscience concentrator Linda Goldstein Knowlton and her husband adopted their ten-month-old daughter, Ruby, in China several years ago, Goldstein Knowlton wanted to know more about the questions Ruby might ask as she grew older. Since China began permitting international adoption in 1992, more than 150,000 Chinese-born children, mostly girls, have been adopted overseas—80,000 in the United States. When Goldstein Knowlton set out to document how these girls grow up as minorities in their homes and communities, she followed four remarkably articulate teenagers over a period of three years. The result is an intimate glimpse of girls struggling to make sense of their complex lives.

One of the girls, Haley, describes herself as a banana—yellow on the outside, white on the inside. A beauty pageant contestant in Tennessee, she covets her older sister's long blond tresses. Haley and her mother frequently travel to China to bring supplies to orphanages, and in the film they return to the village where Haley was abandoned to put up posters seeking her birth family. Incredibly, within hours a man comes forward, and subsequent DNA tests reveal that he is in fact her biological father. With the awkward candor of a home video, Goldstein Knowlton records Haley's excruciating reconnection with the mother who abandoned her as an infant.

Abandonment, of course, is the cruel common denominator to these stories. In China, boys are traditionally preferred to girls, and, without a social safety net, parents need a son to care for them in old age. Those customs have collided tragically with the one-child policy, which China instituted in 1979 to stem overpopulation, and one result has been that hundreds of thousands of baby girls are abandoned each year. In Somewhere Between adoptees matter-of-factly tick off their "finding places": under a willow tree, outside an orphanage, by the side of the road. 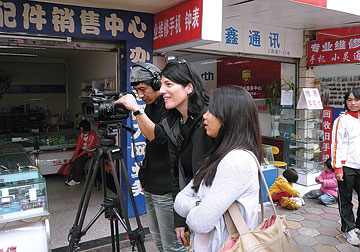 Courtesy Linda Goldstein Knowlton
Knowlton, center, filming in China.
That casual talk hides real anguish, though. Asked in the film how she feels about the word abandon, one of the girls fights to hold back tears. Rejected simply because of her gender, she has worked tirelessly to prove that she is good enough, excelling in her classes at Phillips Exeter, as a competitive skater, as coxswain on the women's crew. When she quits crew to practice yoga, you want to cheer for her.

This summer, Somewhere Between sold out screenings at the Los Angeles Film Festival and Toronto's Hot Docs festival, where it won the Sundance Channel Audience Award. That shouldn't surprise fans of Goldstein Knowlton's previous films. Her documentary The World According to Sesame Street debuted at Sundance in 2006, and her production credits include the feature films Whale Rider and The Shipping News. Somewhere Between shares their emotional power, and its soundtrack includes several haunting pieces composed and performed by rock violinist Lili Haydn. It probes the politics and ethical issues that plague international adoption—but always from the girls' perspective. This is their story, and they are extraordinarily capable narrators.

"Whether I'm in America or China, [people] know that I'm in some way a foreigner," says one of the young women, Fang, who was five when her stepbrother took her into a city on a bus, left her on the sidewalk, and instructed her to wait there for him. "That's how my life with my family ended," Fang says, and amends her statement: "With my birth family."

"I guess I'm a child stuck between two countries," she sadly muses at one point. By the film's end, though, she has found her way free, but to tell that story here would be a spoiler.

Charlotte Bruce Harvey is the BAM's managing editor. She adopted a Chinese girl in 1999.