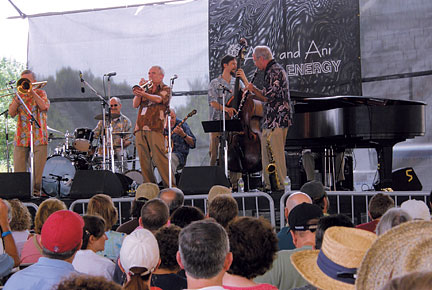 The opening act at this summer's Newport Jazz Festival was a joyous performance by the not-so-new New Black Eagle Jazz Band, featuring Stan Vincent '57, below, on trombone. Vincent, seventy-three, and his bandmates describe themselves as "keepers of the flame," and they've been playing old-time New Orleans and Chicago style jazz since 1971. Still, this was their first gig at Newport, and they played a rousing set of classics by Duke Ellington, Louis Armstrong, and other giants. This fall, the Black Eagles celebrated their fortieth anniversary with a September 18 concert in Stow, Massachusetts. For more information, go to blackeagles.com. You can download the Black Eagles' Newport show podcast at npr.org.
What do you think?
See what other readers are saying about this article and add your voice.