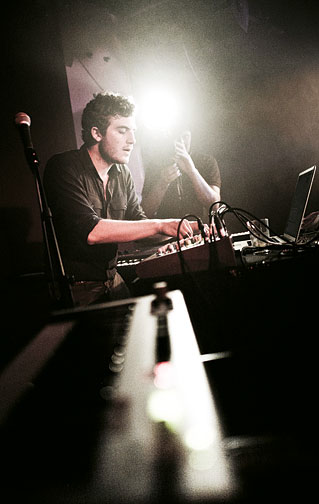 Ever since Nicolas Jaar '12 released his debut CD, Space is Only Noise, on his label, Clown and Sunset, last winter, the comparative literature student has been filling nightclubs across Europe—from Turkey to Ireland. Above, he performs at Le Rex Club in Paris. The electronic music critic at the Guardian described a show in Manchester, England: "Jaar made the packed room his own, splicing together ambient electroacoustic pieces, left-field electronic pop/dance, world musics, and heavily manipulated edits of everything from contemporary R&B to the jazz standard, 'Summertime.' With its slow, low-slung momentum, his set was deeply sonically strange and unusually emotionally complex. The crowd was delirious. The man less so." Jaar, apparently, felt he'd done better elsewhere.
What do you think?
See what other readers are saying about this article and add your voice.

Reader Responses to On Tour