Long before hipster bars and boutique hotels lured tourists to New York City's Lower East Side, the promise of a better life drew generations of Jewish immigrants to the neighborhood's crowded cold-water walk-ups. As a vestige of that time, the Tenement Museum is an apt venue for singer-songwriter Clare Burson '97 and writer Anna Solomon '98, whose creative collaboration made its debut at the museum on September 7 before traveling to other cities. Solomon read from her novel The Little Bride, about a Jewish mail-order bride, and Burson performed what she calls her "little suite" of songs inspired by the novel. 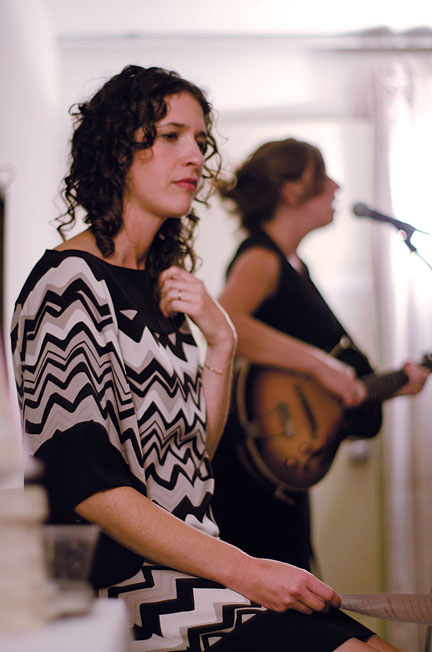 Antek Olejniczak
Anna Solomon, left, and Clare Burson at the debut of their musical book tour.
In rich, deep prose, The Little Bride tells the story of sixteen-year-old Minna Losk, who flees poverty and pogroms in 1880s Odessa and travels to the United States, only to discover that her intended, Max, is a devout Orthodox man more than twice her age, whose first wife left him. He lives with his two teenage sons in a one-room sod hut in North Dakota. The Great Plains is a bleak place in which to eke out an existence, and Max's stubborn adherence to the laws of Judaism makes it even harder. When Minna finds herself attracted to her stepson, Sam, she must navigate her new life and her new identity in an increasingly fraught situation. The most stunning aspect of The Little Bride is the way in which its characters are never so likeable as to be perfect and never so unlikeable as to be villains. Max and Minna develop a real affection for one another, even as Minna feels increasingly trapped and frustrated by their life together. The story is brutal but also infused with hope. Minna's ingenuity saves her in the end, but her survival does not come without great personal cost.

Solomon, who grew up in one of a handful of Jewish families in the port town of Gloucester, Massachusetts, says she's "always been drawn to stories about people living in places where they don't seem to belong." Her short stories, which have won a Pushcart Prize and a Missouri Review Editor's Prize, are set in such far-flung and rural places as Alaska and North Dakota. So, when she stumbled across a website called "Stories Untold: Jewish Pioneer Women," she discovered a forgotten time when Jewish women drove wagons and roped cattle.

Solomon met Clare Burson several years ago through their husbands, who are longtime friends. "We totally hit it off," Burson recalls. "We talked about how cool it would be to collaborate, but we didn't have something obvious to build that collaboration on." When the completion of The Little Bride coincided with the release of Burson's acclaimed 2010 album Silver and Ash—which in ten interrelated songs tells the story of her grandmother's German childhood and 1938 immigration to the United States—the timing seemed right.

Burson studied modern European history at Brown, focusing on Judaic studies. She took two extended trips to Germany—one during a year off from her studies and the other on a Fulbright after graduation, during which she studied German identity politics in the wake of the Holocaust. She learned to play classical violin and then fiddle, beginning at an early age, but picked up a guitar only when one of her roommates in Germany gave her a hand-me-down and taught her a few chords. About halfway through her Fulbright, Burson decided to forego graduate school and joined a rock band.

She won a dedicated following of indie-folk fans after the 2003 release of In-Between, which was followed by Thieves in 2007. But it was Silver and Ash, she says, that "allowed me to bring in the things I studied and was really passionate about in college, and bring that together with my music in a really meaningful way."

Upon hearing Silver and Ash, Solomon wondered, "Wouldn't it be cool if Clare were interested in writing a song or two" about The Little Bride? Her publisher sent Burson a copy of the galleys, and "it just took off for her," Solomon says, "because so much of it resonated. We write so much about immigrants, and about women, and about memory and loss—it just felt really natural."

Listening to the songs Burson wrote, Solomon says, is "like hearing my book come to life. And actually I've been amazed at how certain parts of the book have become much more powerful to me when I hear a song about them."