Professor emeritus Edwin Honig, a poet and literary critic who was knighted by the rulers of both Portugal and Spain for his literary translations, died May 25 of complications from Alzheimer's disease. He was ninety-one. 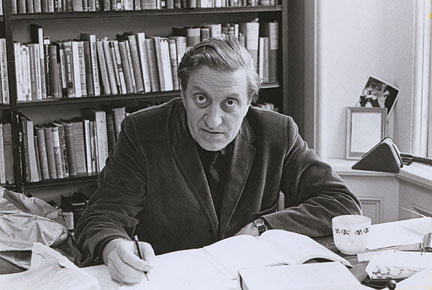 "You're rich, you beggar. You've got a clean page to start with." wrote Edwin Honig.

Edwin Honig came to Brown from Harvard in 1957 to create the graduate program in creative writing—now Literary Arts. He built its foundation by hiring exceptional writers, starting with the experimental novelist John Hawkes, and founded Copper Beech Press, which specializes in poetry and literary translation.

Under Honig's direction, Brown's creative writing program became renowned for the quality of its faculty and their close attention to students. He retired in 1982 as professor emeritus of English and comparative literature.

A modernist poet, Honig published a dozen collections—including The Imminence of Love, Gifts of Light, The Gazebos, and Interrupted Praise—and the compilation Time and Again, Poems 1940–1997. In the long poem Four Springs, he recalled Walt Whitman: "High noon. It's time to get up—jump into my pants, / Run out and dance / In the foggy streets of Providence, play God / Maybe bring out the sun."

When Alzheimer's disease began to affect him, he was working on another volume, Over Time. "Honig has been a poet whose sorrow is always coming home," Daniel Hughes wrote in the Dictionary of Literary Biography. "No poet of our time has more fiercely presented man's tragic mortality even as he finds an impressive variety of means by which that mortality is admitted and sublimed."

As a literary critic, Honig wrote Dark Conceit: The Making of an Allegory. His other books included Calderón and the Seizures of Honor and The Poet's Other Voice, a collection of interviews with translators. With Oscar Williams, he coedited Major American Poets and The Major Metaphysical Poets.

After Honig had retired from Brown, when the president of Portugal and the king of Spain honored him, Honig worried that his reputation as a translator would eclipse his poetry, says his longtime colleague and fellow poet Michael Harper. Honig translated the poetry of Federico García Lorca, who was killed by Franco's forces during the Spanish Civil War in 1936, and published the first critical study of García Lorca in 1944. His translations also brought the works of the Portuguese modernist poet Fernando Pessoa to the attention of English-speaking readers. Among the other authors whose works Honig translated are Miguel de Cervantes and Pedro Calderón de la Barca.

Honig's experience with Alzheimer's disease is the subject of the short documentary Translating Edwin Honig: A Poet's Alzheimer's, which made its world premier at the New York Film Festival last September. Directed by his cousin, actor and filmmaker Alan Berliner, "it chronicles its subject's changing relationship to language, memory, and sense of self as his illness progresses," said The New York Times.

Honig was born in Brooklyn, New York, on September 3, 1919. He once told Contemporary Authors that his interest in poetry began suddenly when he was twelve. "In the winter I was reading Tom Swift and the Frank Packard books. In the spring I began reading Eliot, Auden, and Crane. Writing poetry became an activity like collecting stamps or marbles." He credited his love of Spanish to the influence of his grandmother, a Sephardic Jew who spoke several languages, including Spanish and Portuguese, but little English. He studied Spanish at the University of Wisconsin, where he earned his bachelor's and master's degrees, and served in the U.S. Army during World War II.

Twice a Guggenheim Fellow, Honig was also awarded fellowships from the National Endowment for the Arts and the Mishkenot Sha'animim in Jerusalem. Several times he was an artist in residence at Yaddo, the MacDowell Colony and the Virginia Center for the Creative Arts. He also directed Rhode Island's Poetry in the Schools Program for several years.

His survivors include his sister, Lila Putnam; two sons; and his former wife, Margot Dennes.

A memorial service for Edwin Honig will be held in the McCormack Family Theater at 7 p.m., October 13.