On a clear, warm Sunday afternoon the Brown campus honored the tenth anniversary of 9/11 much as it did the tragedy itself: quietly and thoughtfully, with an afternoon of meditative activities on the College Green. A "spiritual labyrinth" had been painted on the grass, and people of all ages walked its twisting path. Across the Green, volunteers signed up for a blood drive, and people made peace flags and long strings of origami cranes as symbols of world unity. 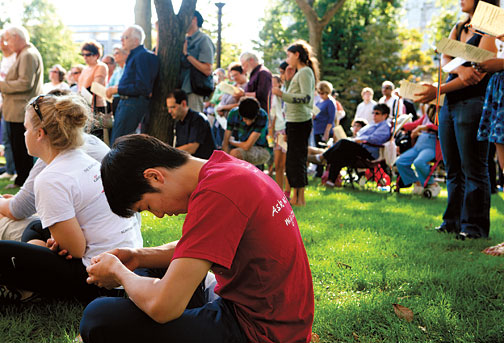 Michael Cohea
Neighbors and students gathered in prayer and song on the Front Campus.
At 4 p.m., the bells tolled on campus, and about 100 students, faculty, local alumni, and members of various Rhode Island places of worship gathered on the Front Campus for a multi-faith memorial service. "Today we stand exactly where we stood ten years ago," observed University Chaplain Janet Cooper Nelson, recalling the impromptu service that a decade earlier had brought together a stunned and stricken Brown community beneath those same elm trees.

This time the low sunlight warmed the chapel's columns, and the mood was somber but hopeful. Amy Levin, vice president of the Rhode Island Board of Rabbis, and Na'ima Ansari, secretary of the Muslim American Dawah Center in Providence, led a "Litany of Reflection," in which a half dozen local religious leaders spoke about terror, darkness, mourning, and hope.

President Ruth Simmons pointed out the significance of the fact that such a diverse group was gathering so close to the spot where theologian Roger Williams began his "lively experiment" in religious freedom 375 years ago. She read from the thirteenth-century mystic poet Rumi, and many in the crowd nodded as she spoke of the importance of neighbors.

Once again, gathering as a community felt like the right response to terror. And this time, it also felt like a call to work together, like the neighbors we are.