Sizing Up the Bears

Sportswriters seldom pick Brown to win it all in football. Throughout his tenure at Brown, Head Coach Phil Estes has watched year after year as the prognosticators pick rivals like Harvard and Penn to finish ahead of his Bears. This year is no exception, with Penn predicted to win its third consecutive Ivy championship. Harvard is picked to finish second, with Yale third. The experts are predicting Brown will finish fourth in Ivy play this year, and that's just fine with Estes and his team. Nothing motivates them more than being told they're not going to win.

Tom Maguire
With forty-two catches and four touchdown receptions last year, Jimmy Saros '12 was All-Ivy.
"These guys play with a lot of confidence," Estes says. "They earn what they get. They are a blue-collar team."

Here's what the Bears will look like this year:

Two-year captain Kyle Newhall-Caballero '12 is returning for a fifth year after missing most of last season with injuries. An All-Ivy player in 2009, he was second nationally in completions, tenth in total offense, and twelfth in passing yards. Against Holy Cross, he set an Ivy League record for completions in a game with forty-six.

Estes has developed some impressive wide receivers through the years, including Sean Morey '99, Stephen Campbell '00, Chas Gessner '03, Buddy Farnham '10, and Bobby Sewall '10. This year, Estes says, the Bears have receivers who are among the best in the league.

First team All-Ivy wideout Alex Tounkara '12, who led the team with sixty-one receptions last season, is attracting the attention of NFL scouts with his size and range. He can stretch the defense and runs exceptionally well for a 6-foot-4-inch receiver.

All-Ivy Jimmy Saros '12, whose forty-two catches placed him second on the team a year ago, will provide another dependable and experienced target for Newhall-Caballero. He tied for the team lead with four touchdown receptions in 2010.

Returning to the lineup after missing last season due to injury is Matt Sudfeld '12. As a sophomore, he was a valuable third receiver behind Farnham and Sewall on the 2009 team, and he should once again be a key player. Tellef Lundevall '13 and Jonah Fay '12 each caught more than twenty passes last season and should be additional options.

Nicholas Faber '12 is a physical, blocking tight end who will help in the running game and in play-action passing situations. Alex Harris '13 and Andrew Marks '14 are both big and will challenge them for playing time. 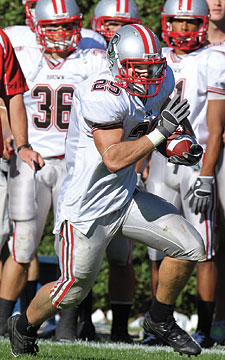 Despite the talent at wide receiver and quarterback, Estes is looking for a balanced offense. Last season, the team pounded out more than 1,200 yards on the ground with All-Ivy tailback Mark Kachmer '13 accounting for 557 of them.

With the graduation of Zach Tronti '11, Kachmer will be the featured back this year. One intriguing option for Estes is John Spooney '14, who won both the 100- and 200-meter dashes at the Ivy League Outdoor Heptagonal Championships. Spooney has breakaway speed to the outside that could be a valuable weapon. Jeffrey Izon '13 is also vying for playing time.

Jackson Freeman '13 will start at fullback, with Cody Taulbee '14 backing him up.

Despite losing All-Ivy starters Patrick Conroy '11 and Brian Ellixson '11, the Bears return four experienced linemen, including All-Ivy center Jack Geiger '12. Jack Templeton '13 will take over for Conroy at left tackle. Evan Johnson '12 will start at left guard with Luke Landers '12 at the other guard spot. Cole Hooper '13 and Malcolm Andry '13 will battle for the right-tackle spot.

The defensive line and secondary are once again loaded with All-Ivy talent. Coach Estes believes he has the depth and talent to rotate more than ten players through the defensive line.

Defensive end Clay McGrath '11 led the team last season with six sacks and 13.5 tackles that resulted in a yardage loss for the opposing team. He will start at defensive end. One of the tackle slots will be filled by captain Kyle Rettig '12, who had twenty-nine stops last season. Seeing significant time at defensive tackle will be Stephen Fox '13, who had seventeen tackles and recovered a fumble last season, and Ross Walthall '13, who had nine tackles last year despite playing with injuries.

Patxi Colbern '13 will likely start at the other end with Luke Miller '12 and Jeff Matteis '12 also in the rotation. Providence native Brett Polacek '14, who played as a freshman and who at 6 feet 6 inches and 250 pounds is one of the biggest players on the team, should also see time on the line.

With the loss of last season's four starting linebackers to graduation, this year's corps is relatively inexperienced. Matt O'Donnell '12, who made twenty-four tackles last season, will start on the inside alongside Brett Wyman '12, who had fourteen stops in 2010.

Robert Gillett '12, who missed most of last season due to injury, had thirty-one tackles two seasons ago, including four for a loss, and returns this season at strong outside linebacker. Daniel Smithwick '12 will fill the other outside spot, along with Sam McGrath '12 and Shane Cooney '12.

In the secondary, Brown returns one of the premier players in the league, first-team All-Ivy cornerback A.J. Cruz '13. Cruz had thirty-three tackles and two interceptions last season. Rather than mess with Cruz, opposing coaches will likely send plenty of action in the direction of the other corner, Mel Farr '12, who had nineteen tackles and one interception last season.

Kachmer and Cruz will once again handle kickoff returns, with Polley and Cruz fielding punt returns. Kachmer had two returns for touchdowns last season, including one for ninety-one yards.

Estes would like to see an improvement this season in the kickoff and punt coverage, an area where the Bears surrendered some big plays last season, including five touchdowns.

"If we stay healthy," Estes says when asked to assess this year's team, "then I think we can be as good as anyone in the league. We'll always surprise people in what they think of our football team."

Reader Responses to Sizing Up the Bears