According to Peter Mackie '59, who has been attending football games for more than a half century, tailgating is a relatively recent ritual. Students in the 1950s, he recalls, just went right to Brown Field. The late Dave Zucconi '55 and Bernie Buonanno '60 were prominent tailgaters through the years, and Brown Football Association president Jerry Massa '77 recalls a particularly memorable tailgating sight in 2001, when the 1976 Ivy championship team was inducted into the Brown Athletics Hall of Fame. 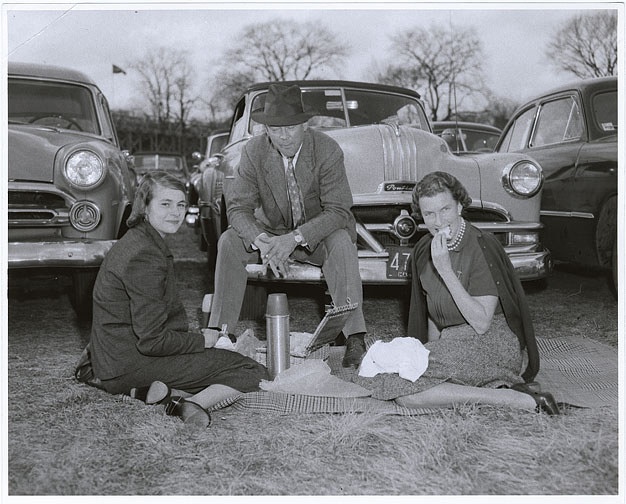 "Joe Jamiel '80 set up his motor home in parking lot A," Massa says, "with an unbelievable buffet of Middle Eastern food and a wide variety of dishes from around the world." Massa adds that most tailgaters just pull stuff out of their trunk, but some fans have been known to go the elegant route, with silver service, linens, and candelabras.

Over the past three seasons, Massa says, the undisputed tailgating kings were John and Marie Anderson, who arrived at every game in a tour bus full of family and friends and outfitted with a complement of food, beverages, and grills—all to watch the Andersons' son John '11. After the final bus trip to watch the Bears play Dartmouth last year, the Andersons fed about eighty people in a celebration that lasted so long it broke up only after the players had already arrived back in Providence. The Andersons have a few tips for serious tailgaters:

• Have a theme each week to vary the food. Have a clambake one week, grill steaks the next, and offer sandwiches after that.

• Bring a pop-up tent in case it rains.

• Check out the competition. Every tailgater has a specialty, from kielbasa to steak tips. Taste them all.

Reader Responses to The Pre-Game Show