When San Francisco needs someone to help balance the city's budget, issue dire reports about the financial future, and call out politicians when they manipulate the numbers, it turns to controller Ben Rosenfield. 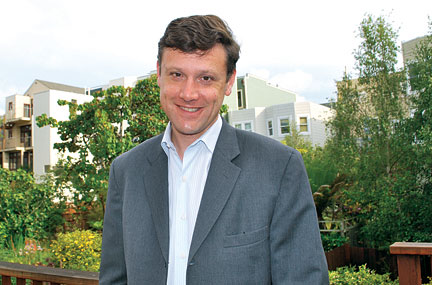 Courtesy Ben Rosenfield
The Clark Kent of San Fransisco.
So how does he describe his job? "It's interesting," he says.

His understated response is typical of his low-key, technocratic style. A recent story in the New York Times dubbed him the "Clark Kent of San Francisco City Hall." He is the rare politician who is happy to do good without drawing attention to himself. Around City Hall, he is universally trusted. This year, his reputation as an honest broker enabled him to negotiate a budget deal between Mayor Ed Lee and the San Francisco Board of Supervisors. The talks ended at 3 a.m. on July 1st, but, by most accounts, they were unusually amicable for San Francisco.

Rosenfield has brought order to the sometimes chaotic world of city finances. His office published the city's first-ever five-year financial plan, and it now issues benchmark reports comparing the efficacy of San Francisco's public services to those in other cities. The question he's constantly asking, Rosenfield says, is: "Where are we getting the best outcomes for our money?"

Rosenfield grew up in Chicago's Hyde Park neighborhood, an island of economic prosperity, he says, in the otherwise poverty-stricken south side of the city. He participated in countless dinner-table conversations about issues of race, class, and crime. "When you grow up in Chicago‚Ä¶, he says, it's hard not to talk about urban problems." At Brown he majored in urban studies and interned for the mayor's public policy director during the reign of the infamous Buddy Cianci.

Rosenfield landed at San Francisco's City Hall thanks to what he describes as a series of "fortunate events." He had moved to San Francisco after graduation to pursue a master's in public policy. Hoping to gain yet more exposure to city government, Rosenfield sent a letter to then-mayor Willie Brown asking for an internship. Brown took a liking to him, and he was soon serving as a junior budget analyst in the mayor's administration.

Over the past thirteen years, Rosenfield has served under three mayors, worked with dozens of supervisors, and weathered several economic downturns.

"Three months into the year, you realize your budget assumptions are wrong and you need to bring spending down," he says. "So it's been a perpetual budget process for the last three years."

This seems unlikely to change. Earlier this year, Rosenfield issued a report stating that San Francisco's budget deficit will rise to $642 million by 2014, almost double what it is now.

It appears that his job will be "interesting" for many years to come.

Reader Responses to The Watchdog